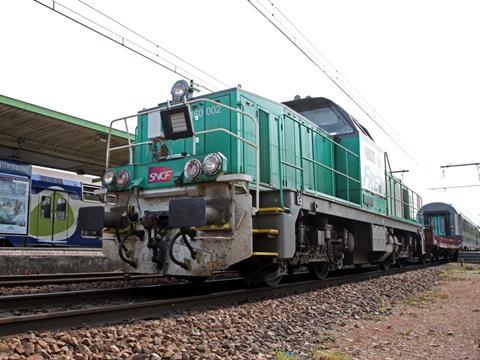 FRANCE: National operator SNCF has successfully tested a remotely-controlled train over a distance of 4 km in the Paris suburbs. Representing a key stage in SNCF’s programme to develop automated operations, the ‘drone train’ ran from Villeneuve-Saint-Georges to Juvisy and was driven from a control centre established at Vigneux-sur-Seine.

Describing the test as ‘a huge première for the rail system’, Head of the Autonomous Train Project at SNCF Luc Laroche said that ‘this successful experiment is a fundamental step towards the achievement of the train of tomorrow.’

SNCF says that two types of technology were tested: satellite transmission and the use of a private cellular LTE network equivalent to 4G. Cameras fitted on the locomotive provided real-time images for the driver in the control centre, who accelerated and braked the train.

After 18 months of research, work on the project will continue over the next few months to develop the techniques and equipment in preparation for commercial applications and to combine the deployment of satellite communications and 4G technologies.

SNCF envisages that remote control would be used to move trains between stations and maintenance depots, within depots and as a ‘last mile’ service to and from customers’ sidings or terminals. It could also be deployed to move trains in ‘degraded situations’.

Laroche said that over the next four years SNCF would develop two prototype autonomous trains, one for freight and one for passenger services. Tests with the autonomous freight train would start ‘in the autumn’ using a locomotive equipped with various automation functions.