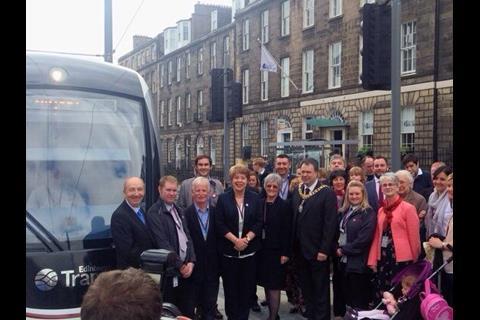 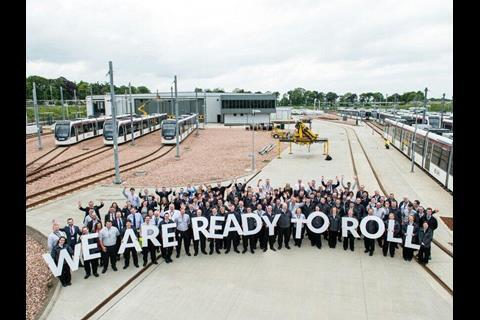 UK: The Edinburgh tramway was officially opened on May 30, ahead of the start of regular passenger services the following day.

‘The tram project has been hugely challenging for the people of Edinburgh but now there seems to be a growing positivity in the city about the start of a brand new transport service’, said Transport Convener Councillor Lesley Hinds.

The 14 km east-west route runs from Edinburgh Airport to York Place with 15 stops. An additional stop at Edinburgh Gateway, between Gogarburn and Gyle Centre, is due to open in December 2016 along with a main line station on the same site. Other rail interchanges are provided at Edinburgh Park and Haymarket, and there is a park-and-ride site at Ingliston. The depot near Gogarburn uses collected rainwater for washing trams and flushing toilets.

Services will run every 8 to 10 min on Monday to Saturday with the first tram leaving York Place at 05.29 and the last at 23.08. Sunday frequencies are 12 to 15 min with the last tram departing York Place at 22.58. The end-to-end journey time is 34 min, although ‘timetables may be reviewed after the first few weeks of passenger service’, according to the city council.

The city-owned operator Edinburgh Trams is part of Transport for Edinburgh, which also includes Lothian Buses. Tram and bus ticketing is integrated. A premium fare will be charged for passengers travelling to or from the airport. Edinburgh Trams has 120 staff, including 40 drivers and 52 ‘ticketing services assistants’.

The route is operated with a fleet of 27 low-floor, bidirectional CAF trams. Each seven-module vehicle is 43 m long and 2 650 mm wide with capacity for 250 passengers including 78 seated and two wheelchair spaces. Maximum speed is 70 km/h. The trams are equipped with regenerative braking, and six substations power the line at 750 V DC.

Final cost of the project is now put at £776m. There are no plans at present to reactivate any of the proposed route extension dropped during the planning and construction phase, but a review of future options is due to take place before the end of the year.