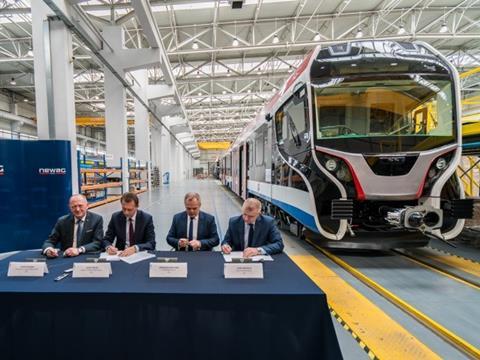 POLAND: Małopolskie voivodship signed a 300m złoty contract with Newag for the supply of 12 electric multiple-units on March 30. The Nowy Sącz based supplier beat Pesa to win the contract, which includes options for up to four more trainsets.

The air-conditioned trains will be equipped with wi-fi, sockets, an audio-visual passenger information system, ticket machines and a passenger counting system. They will have a maximum speed of 160 km/h and be fitted with regenerative braking.

All 12 EMUs will be owned by the voivodship and operated by regional passenger carrier Koleje Małopolskie. Małopolskie voivodship will apply for €42m in EU funding, and the voivodship budget and the railway fund will cover the remainder of the cost.