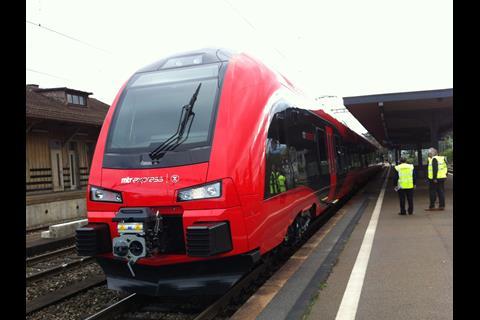 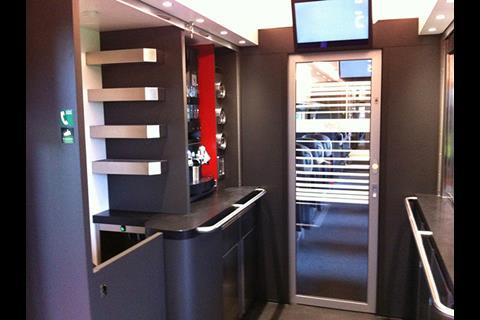 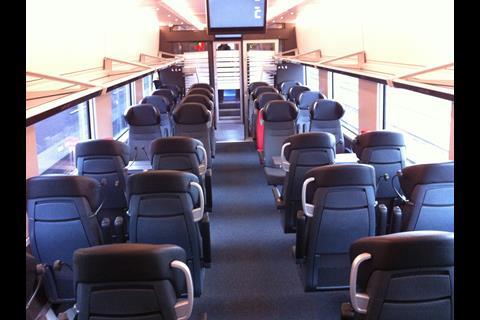 SWEDEN: Ahead of the launch of MTR Express Stockholm – Göteborg open access services in March 2015, guests including Railway Gazette joined MTR Nordic and Stadler staff on a test run of the operator’s first Flirt Intercity EMU in Switzerland on October 17.

MTR Express is part of the Nordic business unit of Hong Kong-based MTR Corp. It intends to launch two trains in each direction over Sweden’s busiest inter-city corridor in March, ramping up to eight return trips per weekday once all six Flirts are delivered by August.

MTR placed a SFr85m order for six five-car 200 km/h 15 kV AC trainsets in November 2013. They are being built at Stadler’s Bussnang plant, and dynamic trials are being undertaken on SBB’s main line between Sulgen and Romanshorn.

Each 70% low-floor EMU has seats for 244 passengers, with a premium ambience to match the operator’s focus on the business travel market. Although only one class of accommodation is to be offered, different price points will offer other enhancements, such as an onboard meal or a ‘leave the next seat free’ booking option. Reflecting a Stockholm – Göteborg journey time of 3 h 19 min, MTR has opted for a single pair of double-leaf doors per car. Catering will be provided from a small galley/cafe bar in the centre of the train.

From a technical standpoint, the MTR units are a close relative of the Flirts being delivered to Norwegian national operator NSB under a 2008 framework agreement. Stadler reports that the extensive winterisation features used on the MTR Express trains are already service-proven; these includes snow shields mounted between the bogies and the carbody, and electric heating in the saloon floors to minimise moisture collection from melted snow.

A more detailed description of the Flirt Intercity for MTR Express will appear in the November 2014 issue of Railway Gazette International.