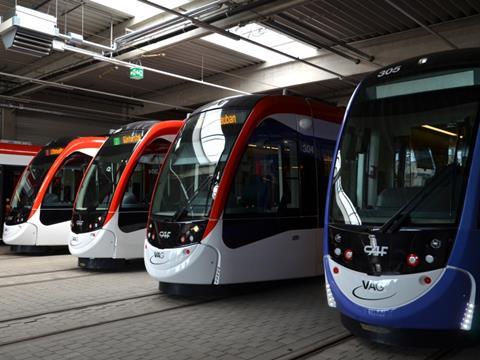 GERMANY: The first passengers rode an Urbos 100 tram in Freiburg on July 16 in a special event held ahead of the trams’ entry into regular passenger service on July 27.

Public transport operator VAG signed a contract with CAF in March 2013 for 12 seven-section 100% low-floor trams for its metre-gauge network. The first was delivered on the night of March 16-17, with five more delivered since then. The remaining six are to be delivered in 2017.

The bidirectional air-conditioned trams are 42 m long with capacity for 241 passengers. There are 66 fixed seats and six folding seats in two wheelchair spaces. Entry is through five 1 300 mm wide double doors and a single door on each side. The trams also feature passenger information screens, two ticket vending machines and external cameras instead of side mirrors.

At the event, Mayor Dieter Salomon said Freiburg is undertaking the largest expansion programme in the tram network’s history, with more than €150m being spent on four extensions and the rolling stock required to operate the extra services.