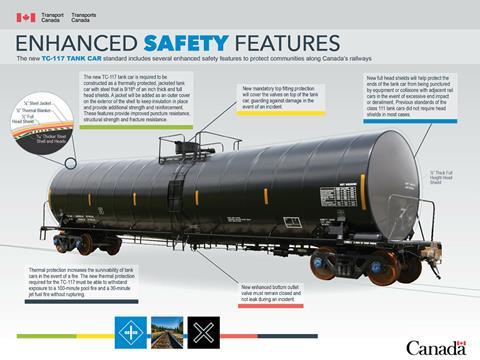 CANADA: The date for ending the use of DOT-111 tank wagons to carry crude oil has been brought forward to November 1, Minister of Transport Marc Garneau announced on July 25.

Tank wagon regulations in Canada and the USA have been tightened following the disastrous derailment and fire at Lac-Mégantic in Québec in 2013. The DOT-111 type must be replaced by modern designs with additional safety features, including thicker steel to provide greater protection, head shields to protect the ends of the tank, protection of the top valves, and thermal protection to improve survivability in the event of a fire.

‘By removing the least crash resistant tank cars in service, we continue to modernise how dangerous goods are shipped in Canada and further protect Canadians and their families who live near Canada's rail network’, said Garneau.