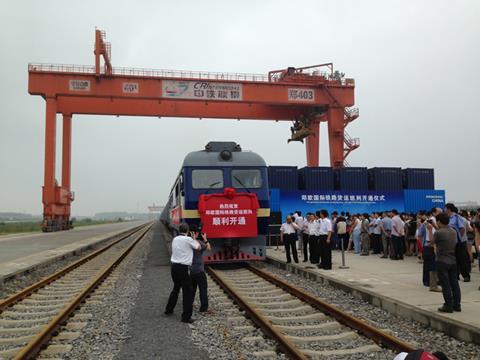 CHINA: A weekly freight train from Hefei to Hamburg is expected to start running in October, following the signing of a memorandum of understanding between DB Cargo and the Hefei municipal government, the operator announced on September 8.

Running via Dostyk in Kazakhstan, Moscow and Warszawa, the 10 600 km trip is expected to take 15 days. The trains are to be organised by the Trans Eurasia Logistics joint venture of DB Cargo and Russian Railways, which has been developing a range of landbridge services between China and western Europe over several years.

Thanks to its strategic position in the eastern province of Anhui, Hefei is well placed to act as a freight hub for customers from eastern and southern China. The municipal government sees the new service as its contribution to the government’s One Belt, One Road initiative. The train is expected to carry a range of products, including photovoltaic components, computers and textiles, and the partners hope that services will operate more frequently as traffic volumes increase.

According to DB Cargo CEO Dr Jürgen Wilder, ‘the constantly rising transport volumes using the trans-Eurasian landbridge demonstrate that rail has established itself as a competitive alternative to other modes of freight transport. I firmly believe that more customers will use rail to transport their goods to and from China in the future.’