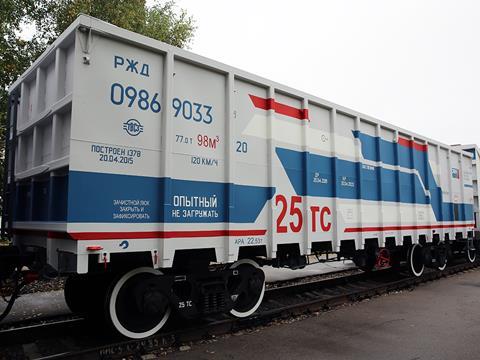 RUSSIA: United Wagon Co has obtained federal certification for the Type 12-9869 open wagon designed by its VNICTT development centre and built at its Tikhvin plant.

UWC has already received an order for the design, and plans to begin series production in the first quarter of 2016 with a manufacturing capacity of 540 wagons/month.

The Type 12-9869 has a high-strength steel body and 25 tonne axleload Barber bogies, giving a volume of 98 m3 for low-density goods such as lignite, or a maximum payload of 77 tonnes which UWC says is 8 tonnes more than typical older wagons. The predicted service life is 32 years.

UWC estimates that more than 170 000 of Russia’s open wagons will be life-expired by 2024, equivalent to one-third of the total.