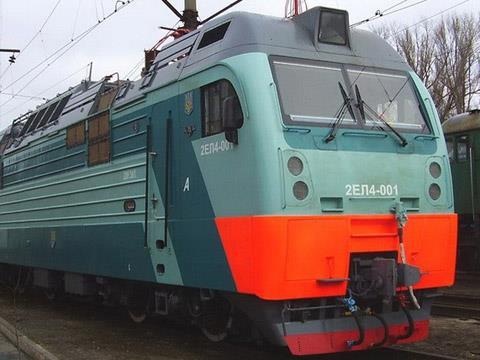 UKRAINE: State railway UZ signed two agreements on July 20 setting out plans to purchase of a total of 433 electric freight locomotives worth €1·46bn.

Subject to funding being secured, firm contracts could be signed in September, with deliveries scheduled for 2012-16. The 3 kV DC locomotives are intended to replace the VL8 design dating from 1953-67 as part of UZ's plan to renew its fleet by 2020.

Under the first agreement Transmashholding's Lugansk plant is to supply 292 Class 2EL4 locomotives and provide maintenance support throughout their life. The Bo-Bo+Bo-Bo twin-unit locomotives will be rated at 6 MW with a maximum speed of 120 km/h. Three prototypes were produced jointly by TMH's Lugansk and Novocherkassk plants in 2009, Lugansk having traditionally focused on diesel locomotives. The agreement includes provision for local manufacturing, and according to THM 80% of production will be undertaken in Ukraine.

On the same day UZ signed a memorandum to acquire 141 class VL11M/6 and 8?1? locomotives from the Tbilisi plant of Georgian manufacturer Elmavalmshenebeli. The twin-unit locomotives will be rated at 4·6 MW with a top speed of 100 km/h.

UZ has also begun tendering for a further four batches of electric locomotives.