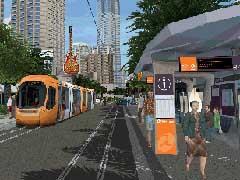 ‘Over the last year the government’s project team has been pouring through 150 boxes of documents from the final three shortlisted bidders’, said Bligh. ‘The end result is a public-private partnership with GoldlinQ that will deliver light rail to the Gold Coast and more than 6 300 direct and indirect jobs.’

GoldlinQ’s contract to design, build, operate and maintain the 13 km light rail line with 16 stops will start on June 1. Preliminary work started in August 2010 and construction should begin in earnest later this year, with tracklaying envisaged in the second half of 2012. Completion is due in 2014.

According to Gold Coast Mayor Ron Clarke, the population of South East Queensland is expected to grow by 57% to 4·4 million by 2031, increasing the number of inhabitants on the Gold Coast to more than 800 000.