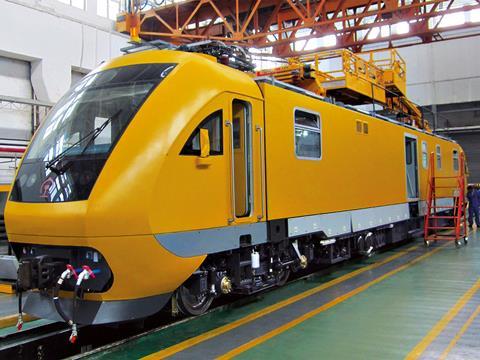 CHINA: China Railways Corp has approved series production of a fleet of diesel railcars designed to enable overhead electrification equipment on high speed lines to be inspected and repaired during short maintenance windows.

The prototype 711CN railcar developed by German manufacturer GBM Gleisbaumechanik Brandenburg has been tested at speeds up to 176 km/h.

The 711CN is based on the Class 711 which is in service with DB Netz. The 711CN is 24·64 m long, weighs 84 tonnes and houses a workshop and facilities for monitoring overhead wires by instrumented pantographs and video cameras. The roof has two mobile work platforms, one of which extends 18·5 m.

CRC plans to acquire a total of 85 vehicles, with the first 26 to be produced with European partners and the rest locally. All will be fitted with two 588 kW diesel engines with Voith T 312 turbo transmissions.