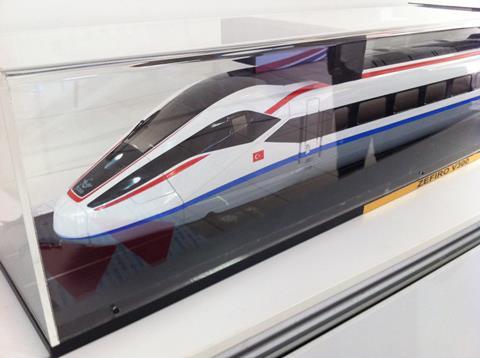 TURKEY: Bombardier Transportation and local supplier Bozankaya signed a memorandum of understanding in Ankara on February 9 to co-operate in high speed train production.

The framework agreement envisages construction of a factory should the two companies win orders for high speed rolling stock from national operator TCDD, which is expected to call tenders for at least 80 trainsets later this year. These would support the expansion of Turkey’s high speed network, which is planned to reach 4 000 route-km by 2023.

The Turkish government has said that extensive local production will be required for future rolling stock orders, and it has sought to support the development of a domestically-designed 250 km/h EMU under the National Train Programme, in which Bozankaya has been among the partners.

With factories in Ankara and Salzgitter in Germany, Bozankaya’s background is in producing trolleybuses and light rail vehicle bodyshells, as well as providing sub-components to the major systems integrators for various rail applications. It is now working on designing and producing its own metro and tram designs for the Turkish market.

‘Turkey has a clear vision of the critical role rail plays in sustainable economic development and is making strategic investments necessary to ensure that vision is realised’, said Furio Rossi, Managing Director for Turkey at Bombardier Transportation. ‘We at Bombardier see great potential in these plans and are pleased to have found a strategic partner in Bozankaya.’

A spokesperson for Bombardier told Railway Gazette that while the initial framework agreement covered the local production of high speed trainsets, it ‘opened the door’ for a wider partnership covering the whole of the Turkish rail market.

A profile of Bozankaya appeared in the May 2015 issue of Railway Gazette International, available to subscribers in our digital archive.