Civil works are getting underway on the Malolos – Clark section of Manila’s North-South Commuter Railway, a flagship scheme for the government’s Build, Build, Build initiative that is expected to herald a wider programme of rail investment across the archipelago. 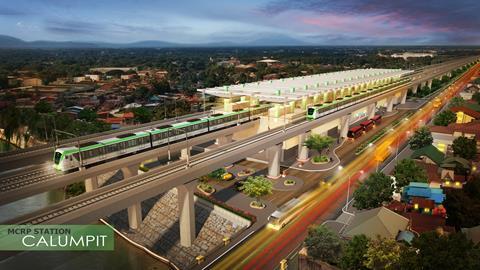 The Malolos – Clark section of the North-South Commuter Rail corridor is being built on a mostly elevated alignment for a maximum operating speed of 160 km/h.

The Philippines’ railway network is undergoing a rebirth after decades of neglect and underspending that has left it in a decrepit state. From a peak of more than 1 100 route-km prior to the Second World War, by 2016 the country had just 77 route-km of operational main line, light rail and metro routes left, serving the Manila conurbation and its 12∙8 million residents spread over an area of 638 km². It goes almost without saying that this level of railway provision relative to population is far less than that found in other Asian megacities.

The lack of rail infrastructure has increased pressure on road transport, which carries about 98% of passenger traffic and 55% of freight in the Philippines. Unsurprisingly, road congestion, particularly in and around Manila, resulted in estimated economic losses of at least US$53∙6m per day, or around US$18bn per annum in 2014, according to the government’s medium-term Philippine Development Plan.

Without access to safe and efficient public transport, low-income families, especially children, women, the elderly, and people with disabilities, cannot easily travel to schools, markets, employment, and social services. This exacerbates the uneven economic growth in urban and rural areas. 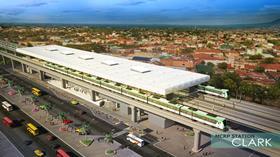 As part of an effort to mitigate some of these large-scale policy challenges, the government announced in April 2017 a major infrastructure stimulus programme termed ‘Build, Build, Build’. Valued at US$160bn, this was intended to address gaps in the country’s road, railway, and bridge infrastructure, as well as in water resource management, social infrastructure, information technology and the power and utilities sector. The BBB programme aims to attract more investment to the Philippines, connect regions and markets, and generate much-needed jobs to help the country develop an upper-middle income economy.

The rail sector looks set to become a major beneficiary of this stimulus, being allocated funding worth US$35bn by the government, equivalent to around a fifth of the budget for the overall programme. The government hopes that this will be sufficient to develop a network of at least 1 200 km, to be constructed or rebuilt after 2022.

The largest investments will be in Manila, on the main island of Luzon and in the southernmost island-group region of Mindanao. The spending should help the Philippines recover from a recent slowdown due to the coronavirus pandemic, providing a much-needed short-term boost to local employment.

To ensure the construction of sustainable, quality infrastructure, especially in the railway sector, the government has adopted a hybrid policy for financing, managing and operating large-scale, complex investments. The government will fund the public infrastructure from its national budget and development assistance. Operation and maintenance of the assets will then be carried out by the private sector or through public-private partnerships.

Among the government’s top priorities is the flagship North–South Commuter Railway in Manila, its largest ever individual infrastructure investment. NSCR is envisaged as a 163 route-km suburban railway network connecting the regional business districts of Clark and New Clark City in the north with central Manila and Calamba City in Laguna province to the south of the capital.

The BBB rail investment also covers enhancements to urban rail routes in Manila, including rehabilitation of the MRT3 metro line, extending light rail lines 1 and 2, constructing new lines 4 and 7, and the planned MRT9, also known as the Metro Manila Subway. The NSCR corridor will provide interchange with all of these urban routes, and connecting links will enable the operation of through services into the MRT9 Metro Manila Subway.

NSCR construction has been divided into three segments. The first covers the Malolos-Clark Railway Project, which will see the development of a 53 km corridor north of the capital broadly following a moribund legacy railway disused for several decades. This project itself has two parts, the first being the 51∙2 km section from Malolos, a suburb north of Manila, to Clark and Clark International Airport in Pampanga province. The second is a 1∙9 km connection at the southern end to connect the railway into the existing Blumentritt station in Manila, where an interchange will be provided to the elevated LRT1 light rail line.

The second stage of the NSCR package covers the 38 km central core, linking Tutuban in Manila with Malolos City. This segment is being funded by the Japan International Cooperation Agency, and construction began in 2019. The third phase would be the 55 km southern corridor connecting Blumentritt to Calamba City.

The Asian Development Bank is assisting the Philippine government in financing the NSCR programme. Since 2019, ADB has provided US$2∙75bn to fund civil works on the Malolos-Clark Railway Project, and it is now preparing financing worth up to US$4∙3bn for the southern section of the corridor; ADB’s board is due to consider this for approval later this year. Meanwhile, plans are in the initial stages for an 18 km northern extension, from Clark to New Clark City, and ADB expects to be involved in assessing funding options for this extension in the years ahead. 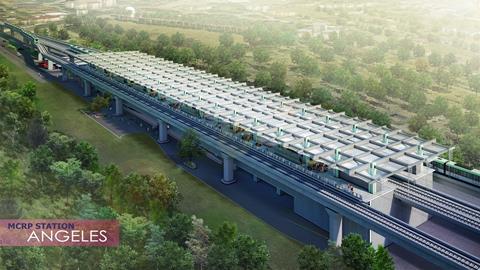 Trains are expected to start operating on the Malolos-Clark Railway in 2023, with the entire NSCR planned for completion by 2028. In 2019, the government advertised tenders for the main works, and five contracts totalling around US$2∙5bn were awarded in August and October 2020. With preparatory and enabling works having been underway for some time the main construction was expected to commence towards the end of May.

Meanwhile, nine tenders for civil works on the Blumentritt – Calamba section were launched between November 2020 and April 2021. Bidding is underway at the time of writing, and contracts for the initial work packages are expected to be awarded later in 2021, or by early 2022.

Bidding for the rolling stock and railway systems, financed by JICA, is also underway, while procurement of an operator and maintenance contractor for the railway is planned to begin in the next few months. 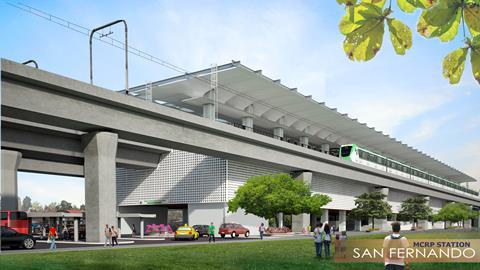 Several stations on the Malolos – Clark route are being designed with multiple platforms to enable airport express and semi-fast trains to overtake local services. 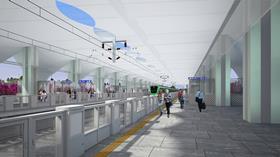 NSCR is being built to standard gauge, with overhead electrification at 1∙5 kV DC. All the stations will be fitted with platform edge doors.

Preparatory works for NSCR are now proceeding amid the pandemic under strict health protocols, providing much-needed jobs and fuelling economic activity. The Malolos-Clark Railway Project alone is expected to create 23 900 construction jobs and contribute to reducing greenhouse gas emissions by more than 60 000 tonnes of CO2 equivalent annually, as commuters switch to rail from private vehicles.

A notable feature of NSCR will be the first airport rail shuttle in the Philippines. This Airport Express service will reduce the journey time between Clark International Airport in Pampanga and Makati City, the main business district in the capital, to less than 1 h, compared to at least 2 h by car or taxi at present. The airport trains will offer reserved seats.

Alongside the airport shuttle, two other service levels will be provided along NSCR: all-stations commuter trains and a semi-fast service calling at selected stations with higher passenger demand. 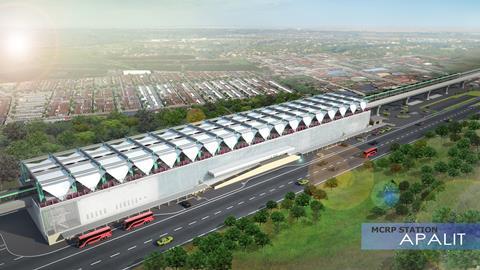 NSCR’s technical parameters envisage a maximum operating speed of 120km/h for the commuter and semi-fast services and 160km/h between Malolos and Clark for the airport express.

Unlike the Philippines’ legacy railway network, which uses 1 067 mm gauge, the commuter corridor will be built to 1 435 mm gauge following international standards. The double-track line will be mostly elevated on prefabricated segmental-span viaducts, except for a tunnel to reach the underground station at Clark International Airport. This will give the railway direct access to the recently completed passenger terminal at Clark, as well as the planned future terminals.

In central Manila, a 4 km underground connecting chord is being planned to link NSCR to the emerging MRT9; this would diverge from the main NSCR route at FTI station near Manila’s current main airport. The link will allow the operation of through trains from stations on NSCR to the Metro Manila Subway.

Being built to high capacity metro standards, MRT9 will run broadly north-south along the eastern edge of the city centre over a distance of around 36 km. It will be the first urban rail route in Manila to run entirely underground, serving 15 stations in the Quezon City and Pasig City districts. Interchange will be provided with LRT1, MRT3 and MRT7. It had been hoped that the first section of this line could open next year, but this now depends on the impact of the pandemic on construction schedules.

Several major structures will be required to take NSCR over existing infrastructure and water courses, while a number of the stations have been planned as four platform hubs with loop lines allowing the faster trains to overtake slower services. All the stations will be fitted with platform edge doors. The line is to be electrified at 1∙5 kV DC using an overhead supply, and ETCS Level 2 train control equipment is to be installed.

Rolling stock is to be provided by Sumitomo Corp and JR East subsidiary J-TREC, which received an order in July 2019 for the supply of 13 eight-car Sustina EMUs to operate the initial NSCR services. Procurement of seven airport trains and a further 38 commuter trainsets is ongoing; these are being funded through JICA. To facilitate through running, MRT9 will share a common rolling stock design with NSCR; the Department of Transportation placed an order on December 21 last year for a fleet of 30 eight-car Sustina sets to operate the metro.

Three maintenance depots are envisaged along the route, located at Clark in Pampanga province; Valenzuela City in central Manila; and at Calamba City in Laguna province. Once fully operational, the NSCR corridor is expected to carry up to 1 million passengers per day.