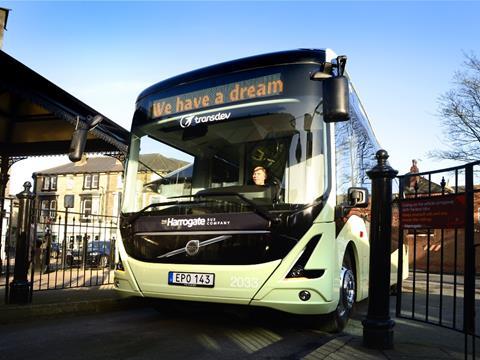 UK: ABB has won a contract to supply electric bus charging infrastructure for a fleet of electric buses that will operate in Harrogate from 2018, the company announced on April 24.

Transdev Blazefield subsidiary Harrogate Bus Co ordered eight Volvo 7900 Electric buses in February. Each 12 m long low-floor bus will be equipped with a lithium-ion batteries, which will be charged at stops.

ABB is to supply three HVC 300P charging stations as well as a substation. These will use OppCharge ‘opportunity charging’ technology, which allows a bus to charge in 3 to 6 min at a stop, as well as at the end of the route. This means the bus can carry a smaller battery.

Buses will connect automatically to the overhead charging masts using pantographs. ABB says that the OppCharge interface will be compatible with other brands and models of electric buses that use opportunity charging.

‘The fast chargers from ABB will play an important role in Transdev’s long-term vision for Harrogate to become a low-emission bus town that adopts world-class electric bus technology’, said Transdev Blazefield CEO Alex Hornby. ‘Ultimately, the vision is about reducing congestion, improving freedom of movement and creating a better environment across Harrogate and beyond.’