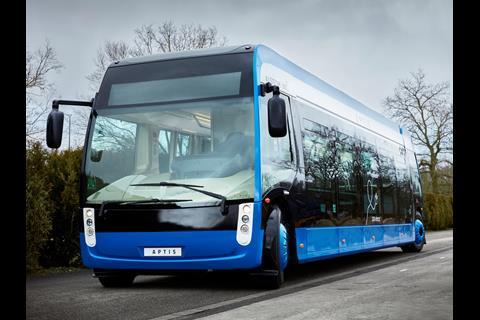 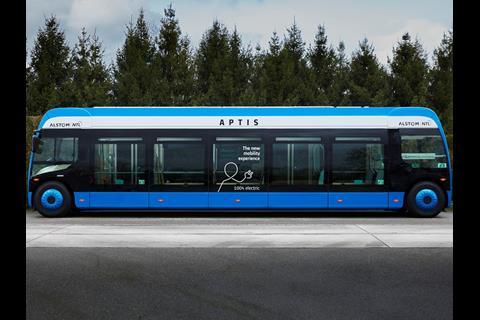 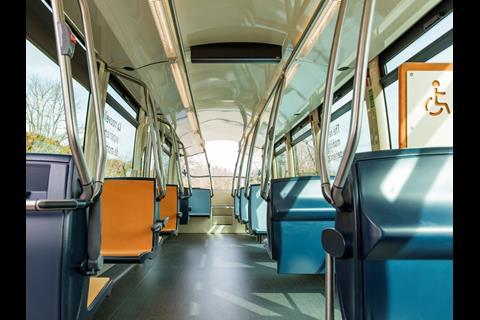 FRANCE: Alstom and NTL presented a prototype of the Aptis electric bus at NTL’s factory in Duppigheim in eastern France on March 9.

Alstom says that the vehicle is based on a tram design, with roof-mounted equipment and a mostly low floor. The vehicle is 12 m long, 2 550 mm wide and 3·1 m high with capacity for 95 passengers, and includes two wheelchair spaces. It features two or three double doors for fast boarding and alighting. Four-wheel steering means that it occupies less space when turning than a conventional bus.

Aptis has a power output of 180 kW and a maximum speed of 70 km/h. The onboard batteries can be charged for a full day’s operation at the depot, which takes 6 h, or topped up at the end of a route using a pantograph or Alstom’s SRS ground-based static charging technology, which takes 5 min.

Alstom says that the vehicle’s life is 20 years. To be assembled at NTL’s Duppigheim factory, each vehicle will have traction equipment from Alstom’s sites in Tarbes, Ornans and Villeurbanne. Alstom’s Saint-Ouen site will be responsible for project management and system integration.

‘With Aptis, we complete our electric mobility offering and are now able to offer cities a full range of urban solutions’, said Alstom CEO Henri Poupart-Lafarge.

Paris region transport authority STIF is to launch two trials of the prototype in the second half of this year, one in co-operation with city transport operator RATP. Alstom notes that STIF aims to replace 80% of its bus fleet in the next 10 years, making it a potential customer for Aptis. Other markets to be targeted include the Netherlands, Belgium, Germany and Spain.