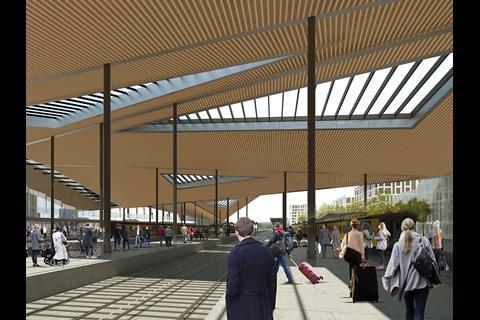 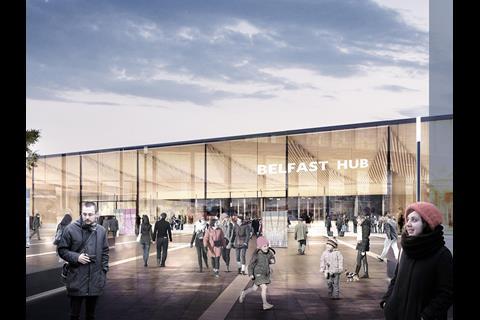 The current rail and bus stations handle seven million passengers/year, and this is predicted to reach 13 million by 2030. While government and European funding is still to be agreed and planning permission has to be sought for the Hub project, initial site clearance has begun and Translink envisages that construction could start in 2018 for opening in the early to mid-2020s.

Under the plans the Enterprise cross-border train service from Dublin would be diverted to the Hub from its current terminus at Belfast Central, which would continue to be serviced by local trains.

Arup, lead architect Fanos Panayides and John McAslan & Partners have been appointed to design the facility, and contractor John Tinnelly & Sons has now begun demolishing warehouses on Grosvenor Road ready for the project.

‘The Transport Hub has been identified by the Northern Ireland Executive as one of seven flagship projects for funding, recognising its strategic importance in supporting the growth of the local economy‘, said Regional Development Minister Michelle McIlveen when visiting demolition works on March 9. ‘This impressive facility will be a catalyst for the regeneration of this area and ensure we have the right infrastructure in place to attract more people to use public transport.’

‘The popularity of public transport continues to grow and we want to offer attractive services and facilities that deliver an excellent customer journey experience’, said Translink Group CEO Chris Conway. ‘Investment in public transport infrastructure has a very positive impact on local and regional economies as evidenced in cities like London, Manchester and Birmingham.’