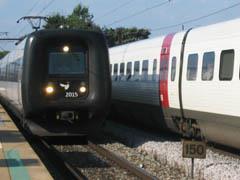 DENMARK: Infrastructure manager Banedanmark has shortlisted six companies for the first civil works on the 56 km København - Ringsted line to the west of the capital. The design and build contract for five bridges is due to be awarded by mid-year, with all of the main contracts to be underway by the end of 2013.

Designed for operation at up to 250 km/h, the electrified double-track route will relieve the current main line through Roskilde, where east-west flows between København and Jylland combine with the north-south corridor linking Sweden and Germany via the Øresund fixed link and the future Fehmarn Belt tunnel.

Expected to open at the end of 2018, the TSI-compliant mixed-traffic route is a key element in Banedanmark's strategic plan to double network capacity by 2020, approved by the government in 2010. The line would carry up to nine passenger trains plus two freight trains per hour, with up to 17 regional passenger services on the current line.

One intermediate station is envisaged at Køge Nord, providing interchange to the western end of the S-bane network, and a link for regional services to join the Lille Sydbanen towards Naestved. A new inter-city and S-bane hub is envisaged at Ny Ellebjerg in the western suburbs of København, which could be used by international trains to avoid the reversal at København H.

Having benchmarked new line construction costs across Europe, Banedanmark has decided to split the civil works into packages worth between €30m and €200m, in order to attract both large international contractors and smaller local firms. According to Project Director Jen Schneider-Tilli, this should reduce unit costs per km from the high levels common in Denmark to a figure closer to that of LGV Rhin-Rhone.

Tenders for the railway systems will follow in 2013-14, with tracklaying expected to get underway in 2015. The 25 kV 50 Hz electrification and ETCS Level 2 would follow, allowing commissioning to start at the end of 2017 and test running by mid-2018. Total cost of the project, including the government's 20% contingency reserve, is put at DKr10·4bn.