Bosnian line reopens with through service from Sarajevo 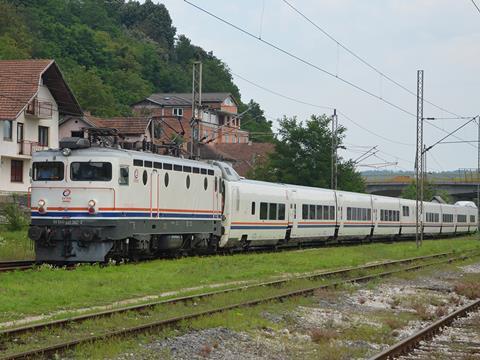 BOSNIA: Railways of the Federation of Bosnia & Herzegovina reinstated passenger services on the 47 km Blatna – Bihać route on July 3, following an inaugural train the previous day.

Electrification equipment which was damaged or destroyed during the 1992-95 war has been reinstated, with the €1·43m cost split between the federal government (82%) and operator (18%). Step dd Sarajevo Co was the main contractor. Passenger facilities at Bihać, Cazin Srbljani, Bosanska Krupa and Bosanska Otoka have also been modernised.

ŽFBH operates a daily through service from Sarajevo to Bihać using one of its Talgo trainsets, departing from the capital at 16.00 and arriving in Bihać at 00.28. The return service leaves at 01.57 and arrives in Sarajevo at 10.28. The previous diesel service between Bihac and Novi Grad (Bosanski Novi) had ceased in 2014.

The single-track route is part of the 178 km Una Line through Bosnia which provided the shortest route between the Croatian cities of Zagreb and Split until the break-up of Yugoslavia. The northern section from Novi Grad to Blatna is owned and operated by the Republika Srpska entity’s railway company ŽRS, and the southern part from Blatna to Bihać by ŽFBH. The section from Bihać to Knin in Croatia is out of use.