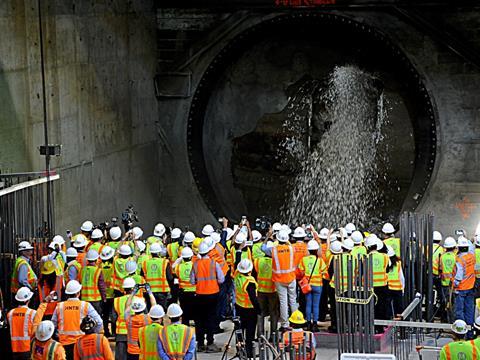 USA: Excavation of one of the twin tunnels for the Crenshaw/LAX light rail line in Los Angeles was completed on October 20, when tunnel boring machine Harriet broke through at the site of the future Leimert Park station.

The Herrenknecht earth pressure balance TBM was lowered into Crenshaw/Expo station in February and began tunnelling in April. It will now be taken apart and reassembled at Expo/Crenshaw to bore the other tunnel.

The 1·5 km twin tunnels will include the three northernmost stations of the 13·7 km north-south line, which is expected to open in late 2019.

Contractor Walsh Shea Corridor Constructors has agreed to undertake civil works for a ninth station at the southern end of the route, at Aviation Boulevard and 96th Street. Airport Metro Connector station will offer interchange with the metro Green Line and the LAX automated peoplemover serving the terminal buildings at the airport.