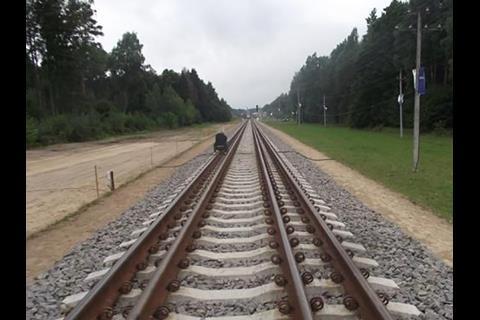 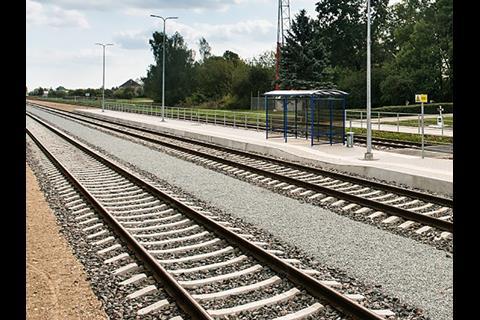 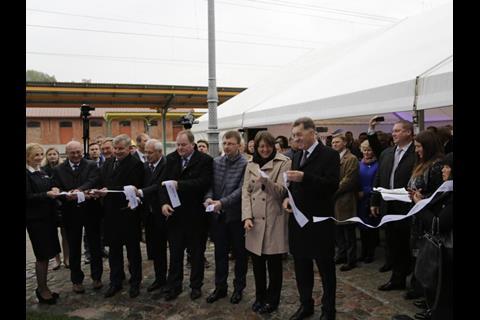 Rail Baltica envisages the construction of a 1 435 mm gauge corridor linking Poland with Lithuania, Latvia and Estonia, and potentially Finland via a 60 km tunnel.

The first section to be completed is a 1 435 mm gauge line from the Polish border to Kaunas, which has been built alongside the existing 1520 mm gauge line from the former break of gauge at Šeštokai which has also been upgraded. The project is designated Rail Baltica I, with Rail Baltica II referring to the proposed 728 km double-track electrified line on a new alignment from Kaunas to Tallinn which is estimated to cost €3·68bn.

The 26 km single track 1 435 mm gauge line from the Polish border to Mockai and Šeštokai has been modernised, with a 7 km section of interlaced four-rail mixed gauge track installed between Mockai and Šeštokai. The 93 km of 1520 mm gauge line from Šeštokai to Kaunas has been completely renewed, and a parallel 1435 mm gauge track constructed with adjacent platforms at Marijampolė, Kazlų Rūda and Kaunas stations. The approach to Kaunas is on a bridge, where the double-track 1520 mm gauge line has been converted to parallel broad and standard gauge single-track routes. The new and modernised lines are suitable for passenger trains running at 120 km/h and freight trains at up to 80 km/h.

The overall cost of Rail Baltica I was €380m. Five construction contracts were awarded, with the largest being a €109·3m deal for a consortium of Kauno Tiltai and Mitnija to construct 34·5 km of 1 435 mm gauge track from Šeštokai to Marijampolė and rebuild the 36 km 1520 mm gauge line. The scope included remodelling Marijampole and Kalvarija stations, installing 22 turnouts, more than 5 km of noise suppression walls, 800 m of retaining walls, 10 level crossings, eight bridges, 32 culverts and a pedestrian subway at Marijampole.

‘We feel proud of having had the opportunity to implement this project, since we realise that we are involved in a particularly significant activity aimed at a closer interlinking of Europe’, said the two consortium partners in a joint statement marking the official opening. ‘We are pleased that our skilled and ambitious specialists have successfully completed this project, which is of strategic significance to the entire Baltic States region.’

PKP IC’s Hańcza passenger service from Warszawa and Białystok is to be extended into Lithuania from the December 2015 timetable change, although current plans could initially require passengers to change to a LG broad gauge service at Mockai. Additional traffic may be generated by freight trains to a €25·4m intermodal terminal in Kaunas which opened on May 25.

‘I am delighted to see that Rail Baltica is becoming a reality’, said Bulc. ‘It is European investment and cross-border cooperation at their best. Transport is a key driver for our economy, and Rail Baltica will speed up communication and exchanges, connect people, and enable job creations and growth.’

Butkevičius thanked Bulc for the European Commission’s ‘continuous care and co-operation’ in implementing Rail Baltica I, but expressed concern about the ‘unsatisfactory condition’ of the Polish line from Białystok to the border, including 30 km/h speed restrictions, and called on Poland to give a higher priority to Rail Baltica.

Rail Baltica II is being developed by a special-purpose company established in October 2014 which is equally owned by the three Baltic States. The alignment is expected to be finalised next year, with design work and land acquisition to be completed in 2019 and construction to be undertaken in 2019-25. Traffic is predicted to reach 5 million passengers and 13 million tonnes of freight in 2030.