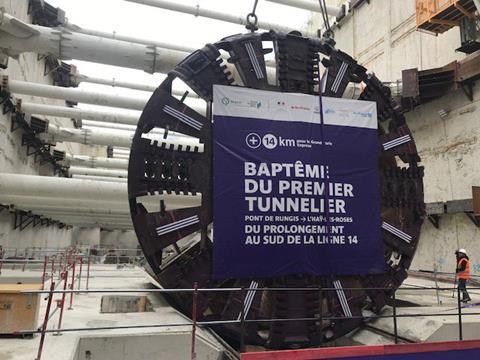 FRANCE: The first tunnel boring machine to excavate metro Line 14 South of the Grand Paris Express network was named at a ceremony at Thiais on April 3.

Next month, TBM Claire will start boring the initial 4·5 km section of tunnel between the future Pont de Rungis station and Jean Prouvé à L’Haÿ-des-Roses. This forms part of the 14 km extension of Line 14 to Orly airport with seven stations.

Claire will be joined by two more TBMs by the middle of this year. One will be used for the 4·5 km tunnels between the site of a future maintenance depot at Morangis and Pont de Rungis, and the other will excavate 5 km between Jean Prouvé à L’Haÿ-des-Roses and Maison Blanche Paris XIIIe. The 140 m section between Maison Blanche and the current southern terminus of RATP metro Line 14 will be excavated using conventional methods, without a TBM.

Herrenknecht has supplied the 8 m diameter TBMs, which will dig tunnels 20 to 50 m deep. Tunnelling is due to be completed in early 2021, with the extension scheduled to open to passengers in 2024.

As part of the Grand Paris Express project, Line 14 would introduce eight-car trainsets to replace the six-car sets that currently operate. A total of 72 trainsets are to be delivered in the next five years, of which 32 are needed for the southern extension.

At the other end of the line, a northern extension to Mairie de Saint-Ouen with four stations is due to enter service next year.