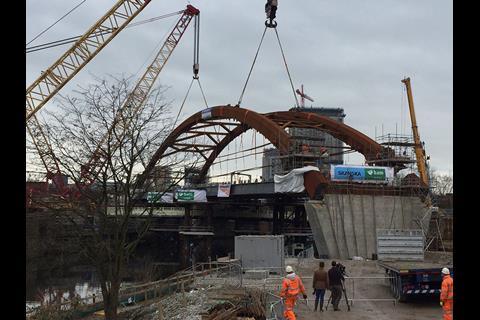 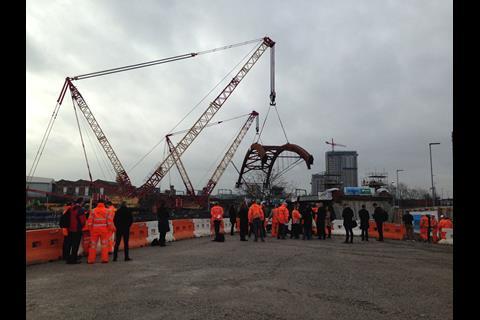 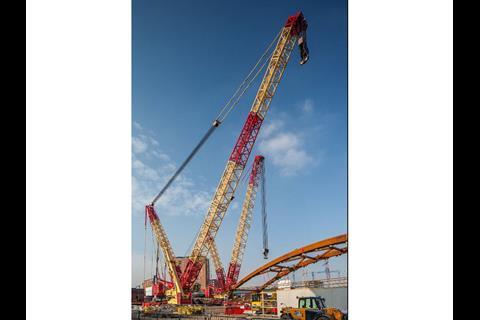 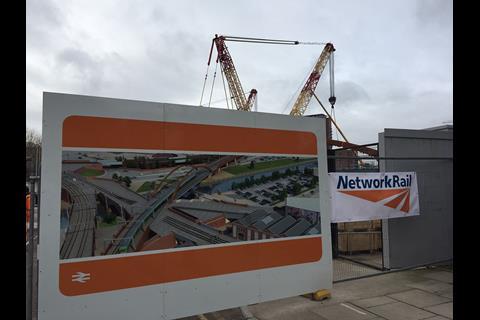 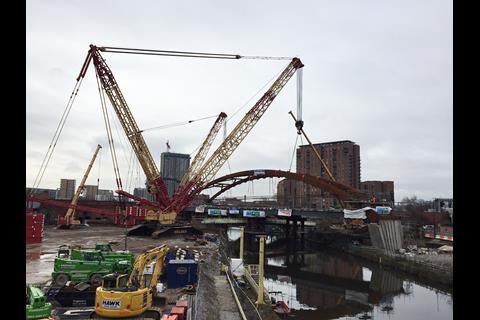 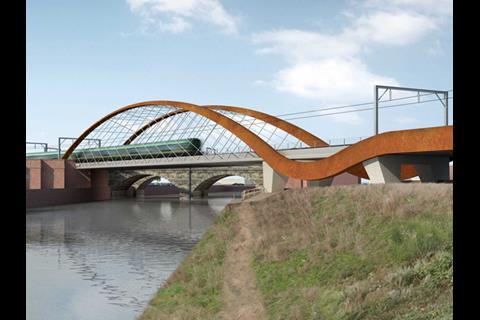 UK: What is claimed to be the first network arch bridge on a UK rail project was swung into place by Network Rail and its construction alliance partners Skanska and BAM Nuttall in Salford on February 21. This required the use of what Skanska said was the UK’s largest crawler crane.

A network arch bridge has inclined hangers which cross each other at least twice. Intended to represent a 'flowing ribbon' running from south to east across the border between Manchester and Salford, the bridge forms the centrepiece of the 1·5 km Ordsall Chord project, which will link Manchester's two principal stations at Piccadilly and Victoria and eliminate the need for many regional services from northeast England to reverse to reach Manchester Airport.

The double-track electrified chord is on course to be commissioned in September and open to revenue services with the December timetable change. Initially, Arriva Rail North and TransPennine Express will each operate one train per hour in each direction over the link, with TPE confirming that a second service would be added from December 2018.

Originally part of the £560m Northern Hub package of capacity enhancements that are centred on Manchester, work on the chord was delayed by almost two years by a series of objections arising from its location adjacent to the historically significant Liverpool Road site.

Now a museum, this was the terminus of the line from Liverpool opened in 1830 as the world's first inter-city passenger railway. NR has refurbished a listed viaduct dating from 1830 as part of the Ordsall Chord works, although rail access to the museum site has been removed.

A package of capacity enhancements to complement the chord has been developed by NR. This includes expansion of Oxford Road station and the construction of two extra through platforms at Piccadilly. However, NR says that these additions are still awaiting final approval in light of the Hendy Review of Control Period 5 investment schemes. Industry insiders report that they are unlikely to be taken forward.

NR's Project Director for Northern Programmes Chris Montgomery says that the infrastructure manager will submit a report to government in December outlining the feasibility and likely costs of further route upgrading work on the main lines linking Liverpool and Manchester with Leeds and York.