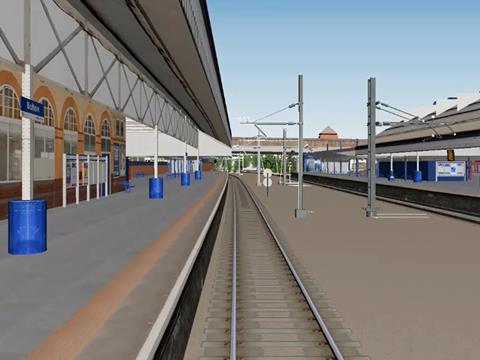 UK: As part of the electrification and modernisation of the Manchester – Preston corridor, a fifth platform is to be opened at Bolton next year, Network Rail has announced.

A series of enhancements to Bolton station are being taken forward by NR and the local council, which is co-ordinating construction of a £48m multimodal bus, rail and cycle interchange adjacent to the station. NR is to build a new walkway between the station and the interchange, as well as refurbishing the station buildings and amenities.

Electrification of the railway through Bolton is due to be completed by December 2017, and NR has been evaluating capacity constraints around the station. As a result of this work, it has decided to reopen platform 5 for passenger trains heading towards Preston. Closed in the early 1990s, the platform is currently used as an unofficial station car park, which is to close permanently on January 24.

‘To bring platform 5 back in to use, we need to rebuild the platform and reinstate the track on land that is currently used for car parking’, said NR’s Area Director Terry Strickland. ‘The additional platform is vital to our upgrade plan on this route and will help to create better journeys for passengers in Bolton.’