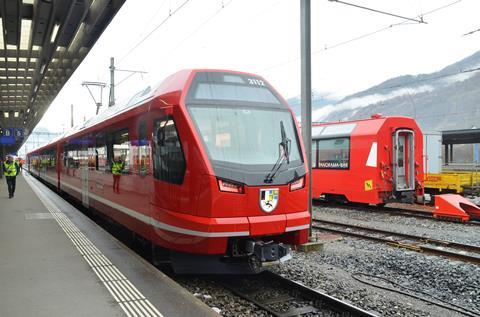 Now on test, the first of RHB’s 36 new Capricorn EMUs are expected to enter service in 2020. (Photo: Toma Bačić)

SWITZERLAND: Two sections of double track on Rhätische Bahn’s Albula main line are ready to open, RhB Director Renato Fasciati announced on November 29, presenting the highlights of what Chairman Stefan Engler said had been ‘a very successful and at the same time challenging year’.

RhB expects to open the double-tracked section between Thusis and Sils im Domleschg on December 6, followed two days later by the refurbished Hinterrhein bridge to provide a second track and alleviate timetabling constraints over the critical junction to the west of Reichenau-Tamins.

A further section of double track is due to open between Bever and Samedan in December 2020, as RhB continues its infrastructure investment programme; the budget of SFr255m for 2020 is slightly up on the SFr254m allocated in 2019. Major works include the ongoing modernisation of Landquart station and refurbishment of Aroser tunnel on the Chur – Arosa line.

The capacity expansion works are part of the preparations for Retica 30, which will see a minimum half-hourly service introduced across the whole of RhB’s 384 km metre-gauge network in December 2022.

Another element of this project will be to renew the trackwork in the 19 km Vereina tunnel, which has just passed the 20th anniversary of its opening on November 19 1999. The line connecting Klosters Platz and Sagliains was designed to carry up to 400 000 cars a year, but Fasciati reported that RhB had already transported more than 500 000 in the first 11 months of 2019. New information systems have been provided at the loading terminals at Klosters Selfranga and Sagliains, as well as 4G and DAB equipment to provide mobile phone reception inside the tunnel.

Traffic using the Vereina car shuttles is up by 10·1% year on year, compared to a 4·4% increase in passenger-km across the network to the end of October 2019. This is despite an engineering blockade which closed 17·2 km of the Engadin line between Susch and Scuol-Tarasp from March 11 to October 6. Ridership on the Bernina Express increased by 30·1%, while the load factor for the luxury Excellence class coaches on the Glacier Express was 55% in the first year. Conversely, RhB reported a serious decline in freight traffic during 2019, with tonnage down by 8·9% and net revenue by 14·5%.

Looking ahead, Fasciati said the first of 36 Capricorn EMUs on order from Stadler at a cost of SFr361m will enter service during 2020, with all to be delivered by 2023. Seven hybrid battery/electric shunting locomotives will also be delivered by Stadler next year, under a SFr21·5m contract placed in September 2018.