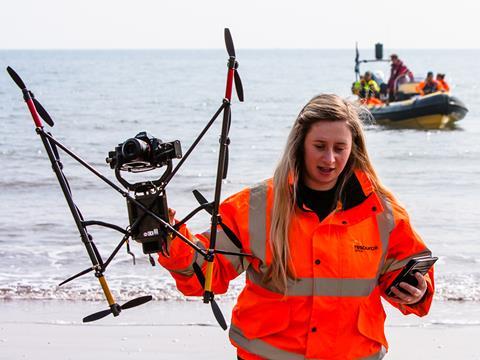 NR began to study the impact of coastal flooding, erosion and cliff instability on the route after severe weather in early 2014 led to the collapse of part of the railway.

Using the drone enables NR to gather close-up footage of the route more quickly than by the traditional use of helicopters or on foot, and is also safer and less intrusive for the local community. The Teignmouth coastline was surveyed in one day, compared to an estimated 30 days by traditional methods. The pilot is legally required to be able to see the UAV at all times, which is easier from the sea than from the potentially dangerous cliffs and being on the water also avoids the need to work with multiple landowners.

‘Securing the future of this line is extremely important to us, which is why we are using the latest technology to build up the most accurate picture of the landscape, how it is likely to change, and what we can do to improve its resilience’, according to Joanna Grew, NR’s commercial scheme sponsor.