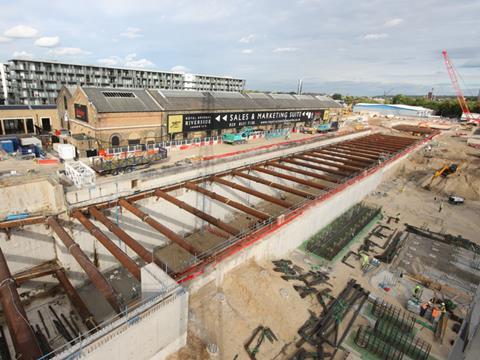 UK: The box for the future Crossrail station at Woolwich has been completed by Berkeley Homes.

It is to be handed over to Crossrail Ltd in early March, ready for the arrival of Herrenknecht tunnel boring machines Sophia and Mary which are digging the Plumstead - North Woolwich section of Crossrail.

The box was built by Berkeley Homes under a 2011 agreement with the Department for Transport, Transport for London, Crossrail Ltd and the Royal Borough of Greenwich. Later this year Berkeley Homes will begin construction of 585 homes along with shops and offices on the site.

Construction created 200 jobs, and took 400 000 working hours during which there were no major injuries or incidents.

Crossrail Ltd says One Canada Square, the tallest building at Canary Wharf, could to be laid on its side in the box with 'room for a double-decker bus at either end'.

To celebrate completion, Berkeley Homes is to run public tours of the station box from 15.00-17.00 on February 27, followed by a fun run within the box to raise money for Demelza House Children's Hospice.