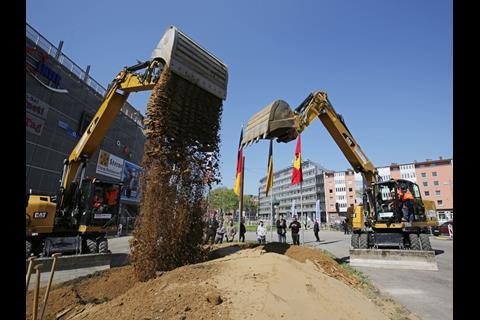 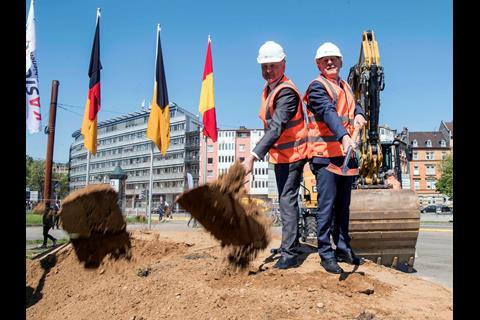 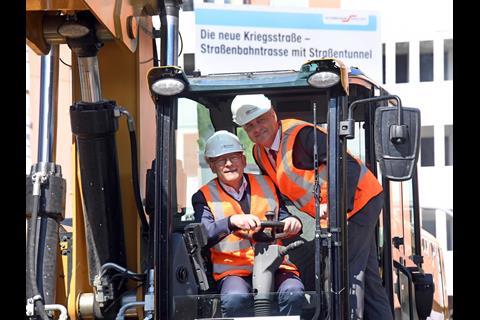 GERMANY: Jazz played on alpenhorns accompanied Baden-Württemberg Transport Minister Winfried Hermann and Lord Mayor of Karlsruhe Frank Mentrup as they attended a groundbreaking ceremony for the second phase of the Kombilösung tram and road project on April 21.

A road tunnel is being built beneath the east-west Kriegsstraße to take car traffic off the road. With the addition of a 1·6 km double-track tram route to be built on the surface, the street will be for the use of trams, pedestrians and cyclists only.

The work is being carried out by a consortium led by Strabag subsidiary Ed. Züblin and including Schleith. The federal and Baden-Württemberg governments are contributing to the estimated cost of €230·2m.

Tracklaying on the surface is due to begin at the end of 2019. Tunnel fit-out would commence a year later, with completion of the tunnel due in May 2021. Opening of the road tunnel is scheduled for September 2021, with tram services to follow in December of that year.

The work on Kriegsstraße forms part of the Kombilösung project, which also includes two tram tunnels in the city centre: a 2∙4 km east-west tunnel along Kaiserstraße and a 1 km north-south tunnel along Ettlinger Straße. Once work is completed, around two-thirds of tram-train services along the street will be diverted via the Kaiserstraße tunnel, with the remainder relocated to the new alignment along Kriegsstraße.