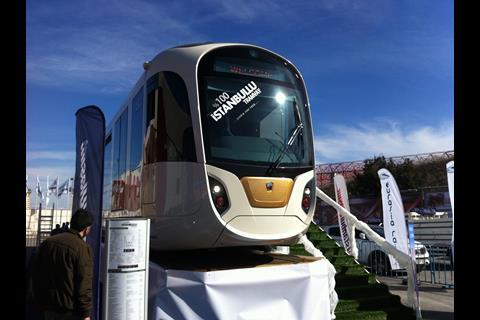 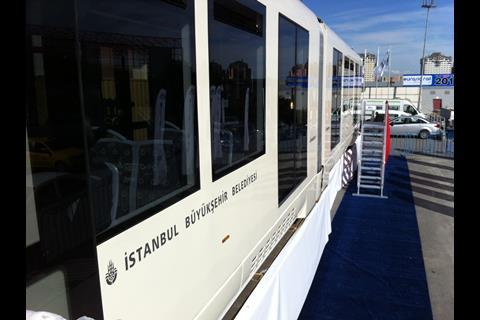 TURKEY: Under the slogan ‘100% Istanbullu’, urban transport operator Istanbul Ulasım has unveiled the first of a series build of 18 high-floor light rail vehicles which it has specified, designed and commissioned itself.

IU has produced a number of prototype and demonstrator LRVs over the past decade as it seeks to enhance its in-house engineering skills, and the operator now believes it is in a strong position to develop a range of locally-designed and assembled cars to operate across the city’s rapidly expanding network of tram, light rail and light metro lines.

Initially, the ‘100% Istanbullu’ cars are to be deployed on route T4 between Topkapi and Habibler, partly replacing a fleet of former Köln Stadtbahn cars, but IU also envisages their use in multiple on the Aksaray – Kirazlı/Atatürk Airport light metro routes.

The two-section LRV is 25·4 m long and 2650 mm wide, with a floor height of 920 mm. Where possible, components have been sourced from domestic suppliers, including bogies from Kayseri-based Railtur and bodyshells from Bozankaya Group. Components sourced internationally include traction equipment from Vossloh Kiepe, gangways from Hübner and couplers from Dellner.

IU has been responsible for supervising both concept and industrial design, with a key objective being to develop ‘an aesthetic which suits Istanbul specifically’. Other local features include a bespoke driving cab tailored to local conditions and staff preferences, and a reinforced saloon designed for a loading of six passengers/m2, rather than the four passengers/m2 typically offered, reflecting the city’s very heavy patronage of light rail.

IU is continuing to develop the design with a view to introducing battery-hybrid and low-floor variants. The operator expects to need up to 1 000 more LRVs over the next decade as its network grows.