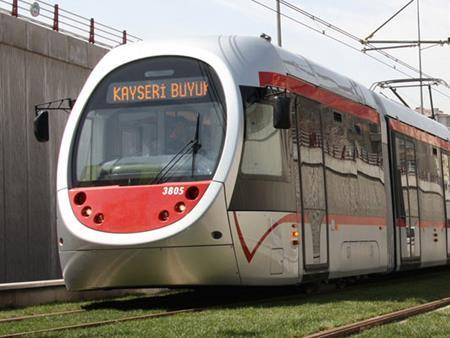 TURKEY: Two extensions to the Kayseray light rail line in Kayseri opened last month, and a further extension south from Erciyes Üniversitesi to Talas is due to open shortly.

The 9·4 km eastern extension with 14 stops from Dogu Terminali to Ildem 5 opened on February 1. This was followed two weeks later by a branch from Erciyesevler to Erciyes Üniversitesi. The five-stop section is 4 km long.

Yap Merkezi was the contractor for the extensions; it also built the initial section of the line.

The fleet is made up of 22 AnsaldoBreda five-section Sirio vehicles that are 32·3 m long with capacity for 203 passengers and a top speed of 80 km/h.

According to mayor Mehmet Özhaseki, the ridership goal for 2014 is 32 million passenger-journeys.