Locomotive traverser at the Port of Felixstowe 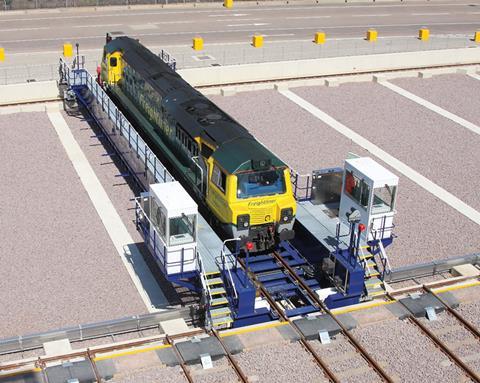 UK: What manufacturer Mechan says is the largest-capacity rail traverser in the UK forms part of the recently-opened North Rail Terminal at the Port of Felixstowe.

The 30 m traverser is used to move locomotives between tracks when running round their trains. It weighs 90 tonnes, and has a capacity of 170 tonnes.

‘This traverser was a real landmark occasion for us’, said Mechan’s Engineering Director, Martin Berry. ‘It has been such a huge undertaking, not only because of its size but also in terms of the technological developments within its design’.

Volker Fitzpatrick was main contractor for the £40m North Rail Terminal, which has doubled rail capacity at the UK’s biggest container port. The project included 10 km of new track, taking the number of loading tracks at the port to 20.