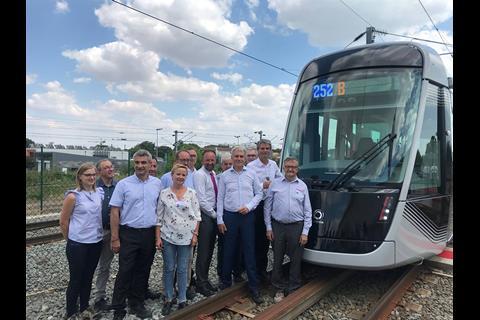 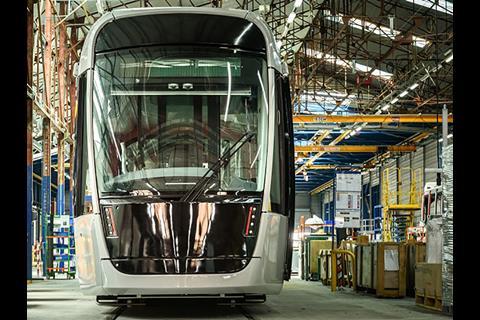 FRANCE: The first Alstom tram for Caen was unveiled on July 10. Deliveries are scheduled to begin in October with entry into service scheduled for September next year.

In November 2016 the city awarded Alstom a €52m contract to supply 23 Citadis X05 trams for the 16·8 km three-line network which is being built to replace its TVR rubber-tyred guided bus system.

The tram is 33 m long with six double doors on each side, large windows covering 45% of the vehicle and a capacity of more than 210 passengers. The interior has LED lighting and six ‘extra large’ passenger information screens. USB charging points are fitted, which Alstom said is a first for France. The manufacturer said the Caen tram would be ‘particularly energy efficient’ and able to handle gradients of more than 8%.

The styling was selected from three options through an online vote. ‘The design chosen by nearly 40% of the population is efficient, simple and modern’, said Rodolphe Thomas, First Vice-President of Caen municipality with responsibility for transport. ‘The selected colours won’t go out of style and aren’t just the expression of a fleeting moment. We’ve also worked on the brightness of the tram, with large glass surfaces that offer excellent visibility of the city.’

Eight of Alstom’s 12 sites in France are involved in production of the fleet, with La Rochelle responsible for project management, design and assembly, Ornans for the motors, Le Creusot for the bogies, Tarbes for the traction drives, Valenciennes for the interior layout, Villeurbanne for the onboard electronics, Aix-en-Provence for the speed monitoring equipment and Saint-Ouen for design.

‘Alstom and its teams are proud to present this first tram only 18 months after having received the order’, said Jean-Baptiste Eyméoud, President of Alstom France, at the unveiling of the first vehicle. ‘This innovative tram benefits from an elegant design and proven reliability, will answer the mobility needs of Caen’.

Alstom has now sold more than 2 500 Citadis trams to over 50 cities, including 23 in France. The Citadis X05 model has also been ordered for Nice, Sydney and the Lusail network in Qatar.