China may be next Desiro customer 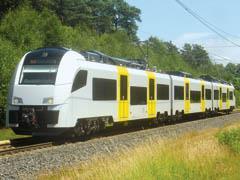 CHINA: Working in partnership with a local company, Siemens Mobility is hoping to secure an order for around 50 suburban trainsets in Guangzhou, having tendered a version of its Desiro product platform.

Of major interest to Siemens and rival bidders are options that could see up to 1500 further trainsets produced. ‘We are in a good position’, said Dr Ansgar Brockmeyer, President, Public Transit Rolling Stock, on November 17.

Meanwhile Brockmeyer is ‘quite confident’ that Siemens will close a deal by the end of 2009 to supply around 50 suburban trainsets for service in the Black Sea port of Sochi which will host the 2014 Winter Olympic Games. The company has been negotiating with Russian authorities for several months following a statement about the Sochi project during a VIP presentation of the Sapsan high speed trains earlier this year. There had previously been suggestions that Bombardier had been selected as preferred bidder.