NEW ZEALAND: The government is to buy Toll New Zealand's rail and ferry business, Prime Minister Helen Clark and Finance Minister Michael Cullen confirmed on May 5. The price had been a sticking point in negotiations (RG 4.08 p22), but has been agreed at NZ$665m to be settled by June 30. 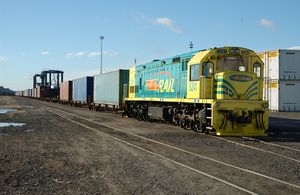 Cullen said it had proved 'extremely difficult' to run the railways without government support. The deal means the government will avoid paying subsidies to third parties, and ends a dispute over the implementation of a National Rail Access Agreement 'that had the potential to destroy value in the business and erode the morale of the people who work in it.'

The government will acquire assets with a book value of NZ$430m, including 180 mainline locomotives, 4?200 wagons, one train ferry and leases on two other ferries. The government had already bought back the infrastructure of the 4?000 km rail network for a token NZ$1 in 2003.

'Selling off our public rail system in the early 1990s and the running-down of the asset afterward has been a painful lesson for New Zealand,' said Cullen. 'During the negotiations with Toll it transpired that buying the rail operating business including the ferries was the best way to increase investment in the industry and enable it to be more responsive to the needs of customers.'

Toll retains the Tranzlink rail and road forwarding business, along with warehousing and contract logistics operations, and will have rent-free use of existing premises for six years.

The framework agreement is subject to due diligence, and transitional arrangements are being discussed with Toll. Long-term plans for the structure of the rail industry are still under development.

Toll Managing Director Paul Little said the company 'had not been looking to sell', but the deal 'will give rail in New Zealand the opportunity to move forward in an environment with greater clarity and ability to better plan its development.'