Pepy to take the top job

FRANCE: Guillaume Pepy was nominated on February 20 as the next President of SNCF. Replacing Anne-Marie Idrac, who was appointed in July 2006 to take over from Louis Gallois when he left for a post in the aerospace industry, Pepy was due to have his appointment confirmed at a cabinet session on February 27 after an SNCF board meeting two days earlier.

During her short term at the top Idrac successfully tackled what we called at the time the toughest management challenge in Europe's railway business. High on her agenda was the need to take France's militant railway trade unions into negotiations on the special status of railway staff and the generous pensions regime. In this unenviable task she was ably helped by Pepy as SNCF's consummate Chief Executive. 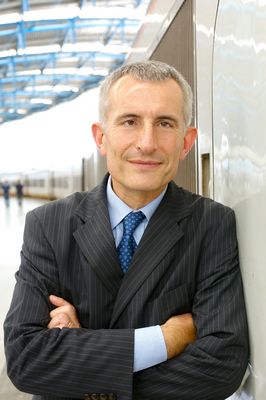 Deals have not been signed yet, but the industrial action last October and the €100m cost in 2008-12 of compensating railway staff for changes to current practice will be a small price to pay if in the end there are serious improvements in productivity.

Idrac and Pepy were also tasked with pushing through a guaranteed minimum level of service during times of industrial action, and here too there has been progress. Above all, Pepy has won respect in the European rail arena for his commercial initiatives, including the Railteam project and the rapid development of internet ticket sales at SNCF. His task now is to rescue SNCF's freight business from disaster in the face of private-sector rivals who have not found it hard to capture traffic from dissatisfied customers.

Action is already being taken, with drastic cuts to wagonload service and reorganisation of traffic flows between major yards, but, according to Les Echos, SNCF is budgeting for its freight business to lose €213m in 2008. The problem, as we have repeatedly said, is lamentable productivity, and Pepy's skills will be in great demand over the coming months as SNCF attempts to match its competitors.