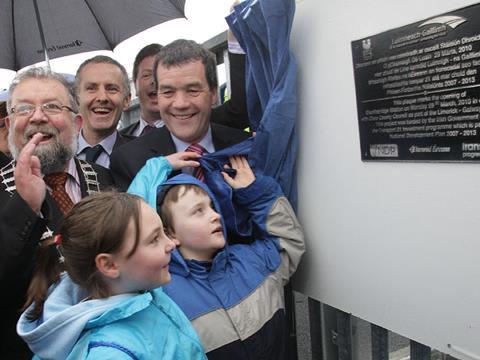 IRELAND: Minister for Transport Noel Dempsey formally launched Ireland's first revival of an inter-city route on March 29. The following day a regular service of five daily return trains ran between Limerick and Galway for the first time since 1976.

The €106·5m Phase 1 of the project to reopen the Western Rail Corridor covered the 58 km Ennis - Athenry section and stations at Sixmilebridge, Gort, Ardrahan and Craughwell. An additional station is to open at Oranmore in 2011, and one is planned for Crusheen.

Reopening of the mothballed north-south route was a priority under the government's Transport 21 strategy. As well as expanding commuter services into the cities of Limerick and Galway, it is intended to promote regional development and reduce centralisation on Dublin. 'This is a truly historic day for the west of Ireland', said Dempsey.

National railway Iarnród Éireann is now working on accurate costings for reopening of the 25 km from Athenry to Tuam in 2011, and the 27 km Phase 3 to Claremorris in 2015. The 74 km alignment of the former route from Claremorris to Collooney and Sligo is to be protected.