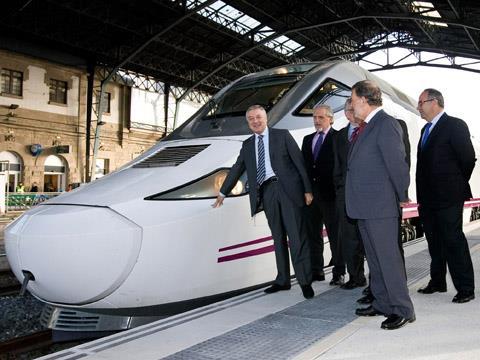 SPAIN: During a test run on the high speed line between Ourense and A Coruña on September 20, Development Minister José Blanco announced that RENFE would introduce Class 730 gauge-changing electro-diesel trainsets on services between Madrid and the northwestern region of Galicia in mid-2012.

The trainsets would enable Madrid - Galicia journey time to be cut to less than 5 h, using high speed infrastructure between Madrid and Olmedo, the non-electrified 1 668 mm gauge route from Olmedo to Ourense, and the Ourense - A Coruña high speed line which is due to open on December 10.

Under a €74m project managed by RENFE's Integria rolling stock maintenance and assembly business, 15 Talgo/Bombardier Class 130 trainsets are being converted to the Class 730 by replacing the end trailer cars with two new cars each housing a 1 800 kW MTU 12V 4000 R43L diesel engine and traction alternator.

A total of seven Class 130s have so far entered the production line, with three now available for testing. Medium-distance services between Ourense and A Coruña are to be operated with four-car Class 121 trainsets, each offering a total of 281 seats.