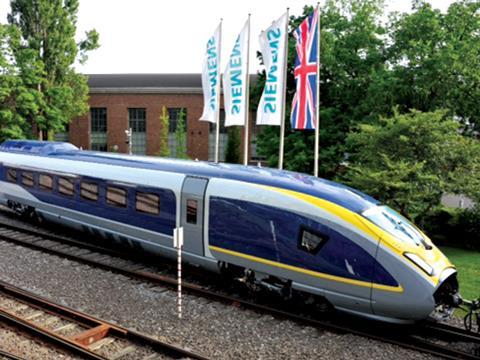 EUROPE: Eurostar, the Dutch government and Dutch national passenger operator NS have signed an agreement for the launch of direct services between London and Amsterdam Centraal in December 2016.

This forms part of a programme to enhance services on HSL-Zuid which was announced by State Secretary for Infrastructure & the Environment Wilma Mansveld on September 27.

The agreement has been submitted to the Dutch parliament for ratification, a process which a Eurostar expects to be completed within the next few months.

Two services a day would be operated using Eurostar's new Siemens Velaro e320 trains, the first of which is now on test. The journey time will be around 4 h, with stops at Brussels, Antwerpen, Rotterdam and Schiphol airport.

A Eurostar spokesman told Railway Gazette International that details of the immigration and baggage screening procedures for UK-bound journeys were still to be worked out. The agreement sets a date for the launch of services, but it is 'very much the first step' and there is still 'a lot of work to do before 2016'.

Announcing the agreement, Eurostar said that since becoming a standalone corporate entity in September 2010 it has 'had clear ambitions to expand its business beyond its existing destinations and to encourage passengers to choose high speed rail over plane for short haul European travel', and a direct high-speed rail service between London and Amsterdam would offer 'an attractive, convenient alternative to the airlines'.

'We have long been ambitious for expansion to new destinations, so today's announcement marks a major advance in our growth plans', said Eurostar Chief Executive Nicolas Petrovic. 'With over three million passengers travelling by air between London and Amsterdam, this is one of Europe's most popular routes. Our fast, comfortable, point-to-point service will greatly enhance the links between the UK and the near Continent, revolutionising travel between these important financial and tourist hubs.'