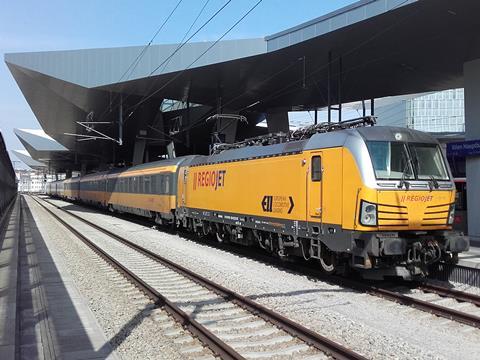 EUROPE: Czech open access operator RegioJet has announced plans to launch a long-distance passenger service on the Praha – Wien – Budapest route from June 2020. There would be two trains each way per day, operated as extensions of the Praha – Brno – Wien services which have been running since December 2017.

This would be the first time that a private operator would directly compete with Hungarian national operator MÁV-Start. It would also provide passengers with an alternative route between Budapest and Praha, as the current direct service runs via Bratislava.

RegioJet currently operates 14 daily coach services to and from Budapest, offering connections to Praha, Wien, Brno and Bratislava. ‘Our policy is to be the best value for money for passengers on rails’, said General Manager Ivana Kašická on August 8. ‘On the Praha – Wien route we have proven that it is possible to bring much higher quality of service on trains for much lower prices than the traditional train operators.’

The trains would use Budapest Déli station, unlike the Austrian Federal Railways Railjet services from Wien which serve Keleti. Trains would arrive at Budapest Déli at 12.14 and 20.14, and depart at 07.45 and 15.35. They would call at Budapest Kelenföld, Győr and Mosonmagyaróvár in Hungary, crossing the border at Hegyeshalom and calling at Wien Meidling and Wien Hbf before continuing to Praha.

RegioJet is to work with local operators Westbahn in Austria and Continental Railway Solution in Hungary, which will provide drivers and conductors and be responsible for operations. This follows an agreement for Westbahn to take over from Graz-Köflacher Bahn as the operator and provider of drivers and conductors for RegioJet’s services within Austria from the December 15 2019 timetable change.