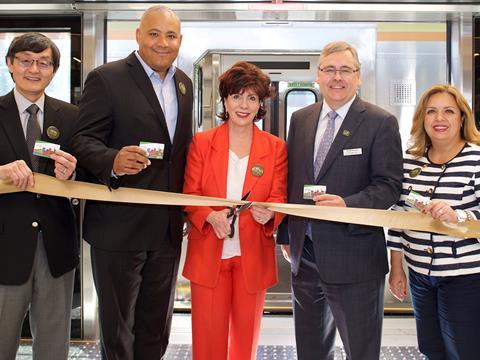 CANADA: The UP Express service between Toronto’s Union Station and Pearson International Airport was launched on June 6.

‘This is a great day to see UP Express service open and Toronto join the ranks of other global cities’, said Ontario’s Minister of Transportation, Steven Del Duca. ‘It will give people one more option to get to and from the airport and the downtown core, and just in time for Toronto to host the 2015 Pan Am and Parapan Am Games this summer.’

Trains run every 15 min, calling at Bloor and Weston, with a 25 min end-to-end journey time. Premium fares are charged. The service is expected to remove 1·2 million car trips from the roads in its first year, and ridership is forecast to reach 2·35 million passengers/year by 2018.

UP Express services use a dedicated platform on the west side of Union Station, built by EllisDon Corp under a C$23·8m contract. They then run over a 22 km upgraded section of GO Transit’s Kitchener line, before running on a 3 km spur into the airport’s Terminal 1 which was built by the AirLINX Transit Partners consortium at a cost of C$128·6m. The tallest pier on the spur viaduct is 25 m high, which regional transport agency Metrolinx says is ‘approximately half the height of Niagara Falls’.

Sumitomo supplied 18 diesel multiple-unit cars under a US$75m contract. These comply with EPA Tier 4 emissions standards, and are designed for conversion into EMUs if electrification goes ahead. Nomad Digital supplied station and on-train wi-fi, which is sponsored by bank CIBC.

The rail link has been planned for more than 30 years. The Union Pearson Air-Link Group was selected for a finance, build and operate concession in 2003, but there were significant delays while route, station and electrification options were debated, and the proposed allocation of revenue risk to the private-sector concessionaire meant that lenders were unwilling to provide financing on viable terms. Negotiations collapsed in 2010, with the provincial government instead asking Metrolinx to design, build and own the link through a new subsidiary, UP Express. The overall project budget is C$456m.