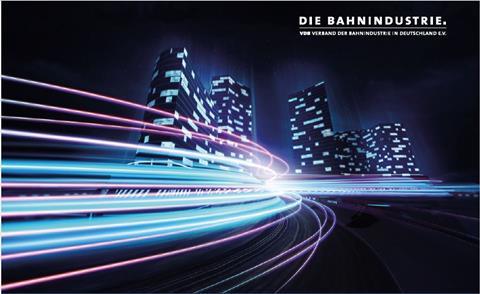 GERMANY: Rail industry association VDB has put forward a seven-point plan to accelerate the introduction of digital train control across the national rail network, suggesting that an industrial scale roll-out of digital interlockings and ETCS could begin as soon as 2022.

The proposals follow the signing on September 23 of a memorandum of understanding between the rail industry associations and Deutsche Bahn AG, setting out the joint implementation of the Digital Schiene Deutschland strategy.

Backed by the Federal Ministry of Transport & Digital Infrastructure, the ‘DSD roll-out initiative’ covers pan-industry co-operation on the development of technical standards, financing measures for equipping both infrastructure and rolling stock, and the development of digital rail operating principles. DB is to establish a subsidiary company by January 2020 to oversee the programme. Digital Schiene Deutschland GmbH will be responsible for infrastructure works and will also co-ordinate the retrofitting of onboard equipment.

Noting that ‘many’ European neighbours had committed to a complete ETCS conversion by 2030, VDB said a rapid rollout was ‘urgently needed’ if Germany was to make its rail network more efficient and reliable and achieve the desired modal shift to sustainable mobility. It believed that it would be possible to start earlier than the 2025 timescale envisaged in the McKinsey study commissioned by the ministry last year.

According to VDB, earlier replacement of legacy technology would deliver an estimated additional benefit of more than €4bn over the same period compared to the previous roll-out scenarios.

VDB Chief Executive Axel Schuppe said there was ‘no question’ that the industry was able to support a more ambitious implementation timetable, noting that German suppliers were already heavily involved with digital railway projects in Denmark, Switzerland, Norway, the UK and Spain, which would provide valuable feedback to support a domestic programme.