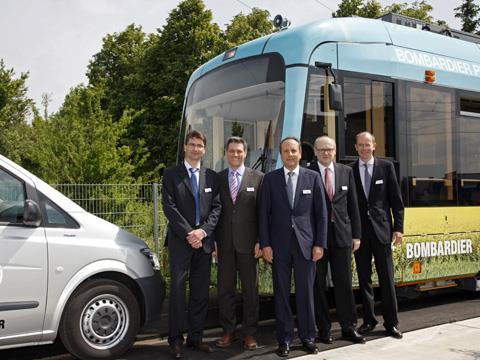 GERMANY: Bombardier Transportation has successfully completed testing of its Primove catenary-free power system on a branch of the Augsburg tram network.

Primove uses cables between the rails to produce magnetic fields which induce electric current for traction power in pick-up coils mounted underneath the vehicle.

The tests were carried out using a modified Bombardier low-floor tram. The Primove 200 kHz induction loops were installed on an 800 m spur line which is only used in public service during events at the city's exhibition centre.

Augsburg transport operator AVG does not plan to deploy Primove, as it has a modern fleet of conventionally powered trams, but the federal government has awarded funding for Bombardier and Braunschweig transport operator BSVAG to undertake in-service trials with two electric buses which will run on a 12 km route.