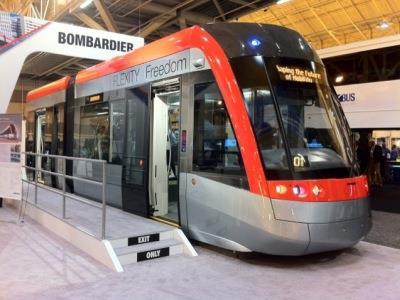 NORTH AMERICA: Bombardier Transportation President & CEO André Navarri launched the ‘Flexity Freedom’ as the company's tram platform for North America at APTA Expo 2011 in New Orleans on October 4. The 100% low-floor car is a parallel development to the Flexity 2, launched in Blackpool last month and targeted at the rest of the world.

Flexity Freedom will meet all major US and Canadian standards for crashworthiness, fire safety and accessability, which Bombardier feels are sufficiently different from European standards to justify a separate product line, albeit at a higher cost to the end user than an ‘off the shelf’ European design. Production will be undertaken in Canada or the USA as appropriate to meet government requirements for work to be undertaken domestically.

The first Flexity Freedom cars will be supplied to Toronto, which placed an order in July 2009 for 204 vehicles to replace the CLRV fleet operating its 1 495 mm gauge street tram network in the city centre and subsequently exercised an option for up to 182 additional cars to a slightly different design as part of its Transit City light rail expansion programme.

The Flexity Freedom name reflects 'freedom for operators to configure to their needs', according to Bombardier's Raymond Bachant. The car is 2 650 mm wide and can be offered in three or five sections, with a maximum capacity of 153 or 251 passengers respectively, although these figures would be 'a tight fit'. The end modules would be powered, whilst the centre module of a five-section car could also be motored if required. The intermediate suspended modules are offered with one or two doors, and the cab fronts, roof profile and side skirts can be customised.

The interior can be specified for a range of applications from traditional streetcar to modern light rail; Bombardier can also add its EBIdrive 50 driver advisory system, and for the highest-capacity applications it envisages fully-automated driverless operation with up to four LRVs working in multiple.

The basic model would be of 1 435 mm gauge gauge, but unusual gauges such as Toronto's can also be accommodated without modifications to the Flexx Urban 3000 bogies. Top speed is 80 km/h.

Bombardier's Primove induction based power supply is offered as an option; according to the supplier when combined with onboard batteries this is expected to be cost-competitive with conventional overhead supplies.

Reflecting Canadian conditions, the trams are designed to cope with heavy snow, featuring heated door thresholds and couplers, heat exchanges on the HVAC, and the ability to cope with snow settling to 355 mm deep on the roof. The underframe will be fabricated from stainless steel to resist corrosion from road gritting salts.