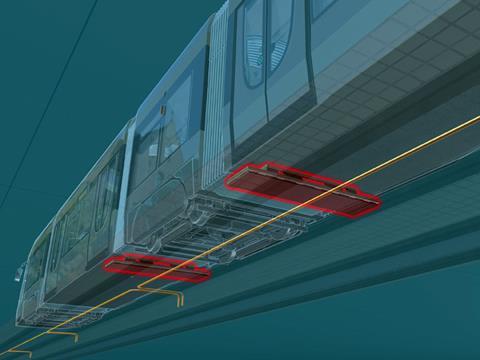 Power is transferred to the vehicle by induction, as used in transformers. The principle is used in industrial applications and household appliances including electric toothbrushes, but Bombardier says Primove is the first tram application.

A primary circuit is formed from power cables buried between the rails and connected to a substation. This produces a magnetic field, which is converted back to electrical current by a pick-up coil mounted under the vehicle.

Cables can be laid under any surface, including concrete, tarmac or grass, and can be fitted to an existing trackbed. The components are not visible and are not affected by the weather, and the supply is only energised when the cable is covered by the vehicle, ensuring safe operation. As there is no direct contact the components are not subject to wear.

The 250 kW continuous output of the prototype is designed to power a typical 30 m light rail vehicle operating at 40 km/h on a 6% gradient. Commercial applications of 100 kW to 1 000 kW are planned.

Development is being carried out using a Bombardier Flexity tram from Halle. This has also been fitted with a roof-mounted Mitrac Energy Saver which uses double-layer 'ultracapacitors' to store energy regenerated during braking for re-use during acceleration. The system has been on test in Mannheim since 2003, where energy savings of up to 30% have been claimed.

The technology could be commercially available by 2010.