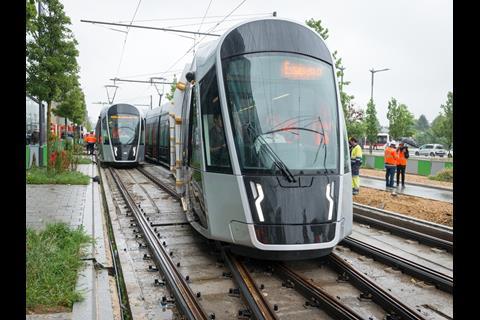 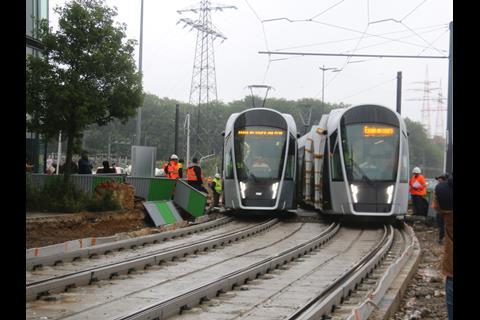 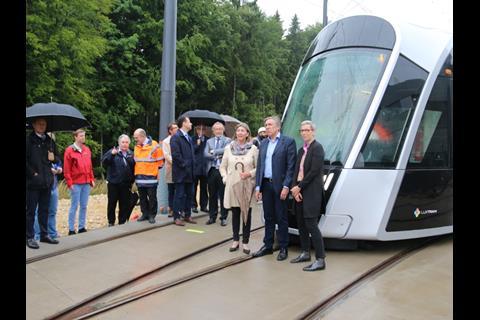 LUXEMBOURG: Test running on the first section of the capital’s light rail line was officially launched on July 12, with a ceremony at the new Tramsschapp depot attended by Minister of Infrastructure & Sustainable Development François Bausch, the Mayor of Luxembourg Lydie Polfer and leader of the city council Sam Tanson.

The start of test running follows the delivery of the first of the 21 CAF-built Urbos trams on February 8. Dynamic trials will initially take place on a section of the reserved track alignment along Avenue John F Kennedy in Kirchberg between Luxexpo and Coque. The 750 V DC overhead line on this section was energised on July 10. According to project promoter Luxtram, the test programme will step up in a series of stages over the next few months in order to verify that both the rolling stock and fixed installations are functioning correctly.

Luxtram expects to be ready to start a period of shadow running in November, operating a full service under normal conditions but without passengers. Revenue service on the 8 km Kirchberg section between Luxexpo and Pafendall-Rout Bréck stop near Pont Rouge is scheduled to begin on December 10.

Construction is currently in progress on the Limpertsberg section from Pont Rouge to Stäreplaz/Etoile, which will add a further three stops. Completion of the full 16 km route from Luxembourg Airport to Cloche d’Or is now expected around 2021.