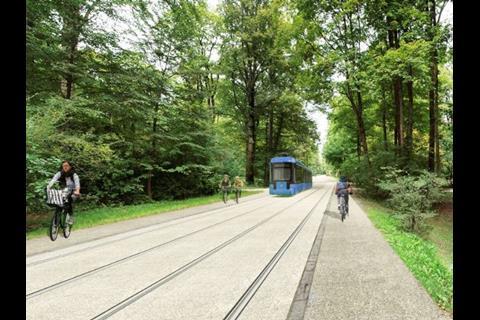 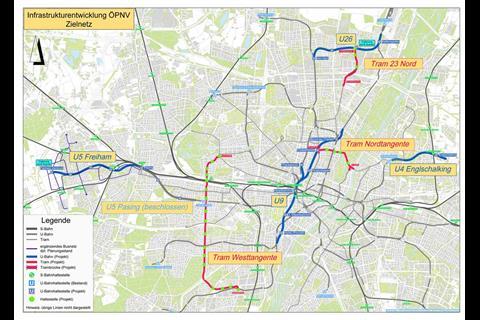 GERMANY: Long-term plans for the expansion of München’s U-Bahn and tram networks have been outlined by the city government, following an agreement between the SPD and CSU political parties.

The €5·5bn package unveiled by Lord Mayor Dieter Reiter and Mayor Josef Schmid on January 11 reflects rising demand for public transport as the city continues to grow. Described by Reiter as ‘a historically unique expansion offensive’, it envisages the construction of four new sections of U-Bahn and three tram routes totalling almost 40 km. This would increase the urban rail network by around 20% ‘over the coming decades’, although a funding package has yet to be agreed.

Earlier this month, the city council decided to push ahead with north-south metro Line U9, in order to relieve the existing network. Providing a direct link between Poccistraße/Implerstraße and Münchner Freiheit via Theresienwiese and München Hauptbahnhof, this project is closely related to the planned second S-Bahn cross-city tunnel, with which it would interchange at the main station. Following the completion of the planning process, construction is expected to take around 10 years.

Planning is also well advanced on the so-called Nordtangente tram route from Elisabethplatz to Tivolistraße through Englischer Garten, which has been highly controversial. Following the city council’s decision in principle, a detailed route could be agreed in the second half of 2019.

Within the next few months, the preferred route for the Westtangente tram line is due to be finalised, allowing Stadtwerke München to apply for formal consent from the Oberbayern regional government. This 9 km north-south link along Fürstenriederstraße will take three years to build and is expected to be completed by 2026.

Two short metro extensions are envisaged. In the east, Line U4 would be extended from Arabellapark to an interchange with S-Bahn Line S8 at Englschalking. In the west, Line U5 is already being extended from Laimer Platz to Pasing but a further extension to serve the Freiham development area could add another four stations. As this would not open until 2035-40, SWM is planning to serve the area by an express bus route as an interim measure.

Related metro and tram projects are intended to improve connectivity in the northern part of the city. Line U26 from Am Hart to Kieferngarten would provide an orbital link between metro lines U2 and U6, but would depend on the construction of U9. Meanwhile, planning is already underway for a northern extension of tram route 23 from Schwabing Nord to the new Bayernkaserne district, running at least as far as Heidemannstraße; a final routing decision is expected next year.