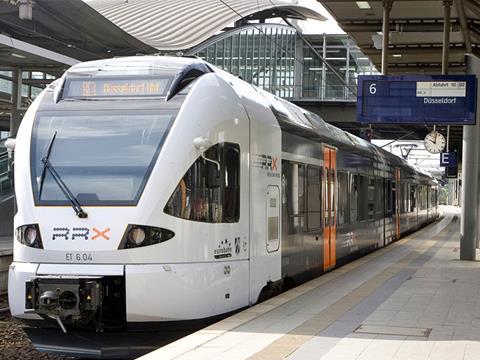 GERMANY: The federal government has committed to including the first phase of the Rhein-Ruhr-Express project in its 2014 budget. This would include funding for modernisation of the Köln-Mülheim -Langenfeld-Berghausen line as well as upgrading works in Dortmund.

'The marathon negotiations are finally crowned with success' said Nordrhein-Westfalen Transport Minister Michael Groschek. 'This is a huge success for people and business in Nordrhein-Westfalen. Thousands of commuters will have new, better and faster connections with RRX.'

The Rhein-Ruhr, Rheinland and Westfalen-Lippe transport authorities have agreed to call tenders in October for the supply of around 80 double-deck electric multiple-units to provide a uniform fleet for RRX services from 2018. These would be required to have a capacity of 400 passengers, with air-conditioning, easy access at all doors and at least two toilets, one of which must be wheelchair accessible.

Because of the expected long life of the units and the high value of the order, which could be worth up to €900m, the transport authorities plan to separate rolling stock procurement from the award of the three planned RRX operating contracts. The authorities would procure the EMUs and then lease them to the operators, with the rolling stock supplier awarded a contract to maintain the units throughout their 30+ year life.