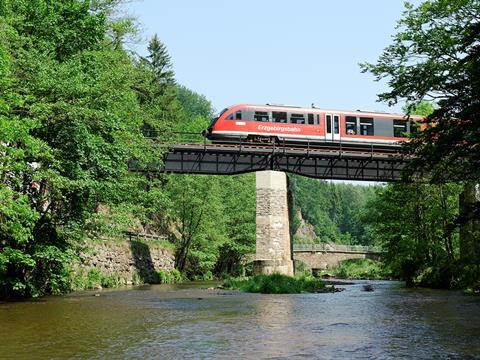 GERMANY: Local transport authority VMS is studying options for reviving passenger services to Rochlitz and on the Pockau-Lengefeld – Marienberg line in Sachsen.

Servies to Rochlitz ended in 2000, with passengers instead needing to travel by bus to Geithain for connections to Leipzig and Chemnitz. VMS is studying options and potential passenger demand for reinstatement of either the route southwest from Rochlitz to Narsdorf or north via Colditz to Großbothen. The cost is estimated to be at least €30m.

Traffic on the 12 km Pockau-Lengefeld – Marienberg line ended following serious flood damage in 1999, but freight services were revived in 2006 and limited passenger services operated until 2013. The local authority has been campaigning for a regular passenger service to Chemnitz, with the annual operating cost estimated at €1·5m.