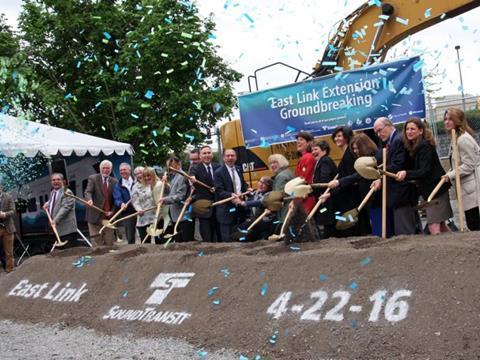 USA: A groundbreaking ceremony in Bellvue on April 22 marked the start of construction of Sound Transit’s East Link light rail line between Seattle and Redmond.

The 22·5 km line will branch off the existing light rail line at International District/Chinatown and run east towards Mercer Island, Bellvue and Redmond. Services will cross Lake Washington on median strips on the I-90 motorway, and a 0·5 km tunnel will be excavated under central Bellvue. There will be 10 stops.

The $3·7bn cost is being partly financed by a $1·33bn TIFIA loan approved by the Federal Transit Administration in January 2015. Sound Transit is also receiving $74·7m in FTA funds and $14m in TIGER grants towards East Link. The city of Bellevue is making a $100m contribution towards the cost of the tunnel, and a cycle and pedestrian bridge from the stop in Overlake is receiving $33m from Microsoft and $10m from the city of Redmond.