Automatic operation of regional passenger trains to be tested 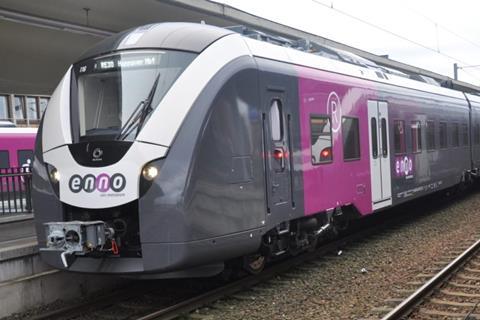 GERMANY: The automatic operation of regional trains in passenger service is to be tested in a ‘regulatory sandbox’ in Niedersachsen, the project partners announced on May 27.

Due to launch in 2021, the project brings together Alstom, aerospace research centre DLR, the Technical University of Berlin, train operator Metronom and the Greater Braunschweig transport authority, which will provide two of its Coradia Continental multiple-units for use as testbeds.

The EMUs will be equipped with ETCS and additional ATO equipment. This will support regular passenger service to Grade of Automation 3 – automated operation with no driver but with an onboard attendant who is able to intervene in an emergency. Shunting moves will be possible in GoA4 unattended mode with no staff on board, but with the possibility of remote intervention.

A first for regional passenger trains

Automated train operation is well established on metro lines that are largely self-contained, but the Niedersachsen pilot project would be ‘a world-first for regional passenger trains’ according to Alstom.

The company is leading a European ATO project as part of the Shift2Rail programme, and is also involved in SNCF’s automated freight train project.

‘In the future, automated trains will optimise regional rail operations, reduce energy consumption, and increase ride comfort’, predicted Jörg Nikutta, Managing Director of Alstom in Germany & Austria. ‘In this way, highly automated driving will make a decisive contribution to climate protection and contribute to the development of a modern, attractive railway system.’

Birgit Milius, head of the Department of Railway Operations & Infrastructure at TU Berlin, said ATO was ‘one of the most exciting challenges in the railway industry’, as it ‘gives us the opportunity to shape and significantly change the operational management of the future’. However, ‘a lot of research is still needed’.

The trials will be undertaken within a ‘regulatory sandbox’, which is being established to enable innovations that are only partially compatible with existing legal and regulatory frameworks to be tested in a real-world environment for a specified period of time.

Jörn Groos, group leader for data acquisition and information retrieval at DLR’s Institute of Transportation Systems Technology, said testing under real conditions was ‘indispensable for the development of practical AI approaches for the optimisation of the railway system’.

The tests will also contribute to the development of a regulatory framework for ATO ahead of the envisaged series production of regional trains equipped for GoA3 operation.