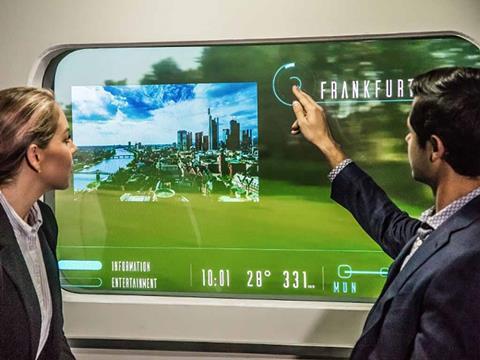 GERMANY: Hyperloop Transportation Technologies and Deutsche Bahn have announced a plan to create a prototype ‘innovation train’ as a showcase for the use of digital technologies.

JumpStarter company HTT said its work on the Hyperloop concept of passenger-carrying capsules running in evacuated tubes had led to the development of ‘digital ecosystems’ which could be applied to more conventional transport modes. ‘New technologies and new ideas can create a better passenger experience’, said CEO Dirk Ahlborn.

HTT and DB are seeking to crowdsource ideas for the project, with initial concepts including the use of augmented reality developed by Re’Flekt to show timetable or tourist information on train windows. DB told Railway Gazette that the proposals to be developed had not yet been finalised, and there could be ideas out there that the operator had not thought of.

DB is to finance the project, and will provide a double-deck coach for trials on its Südostbayernbahn network from early 2017. The network southeast of München has been selected because it offers a mix of daily commuters and tourists who have different requirements.